The right time to start a family may actual­ly be just a myth...
By Saif Asif Khan
Published: October 13, 2014
Tweet Email 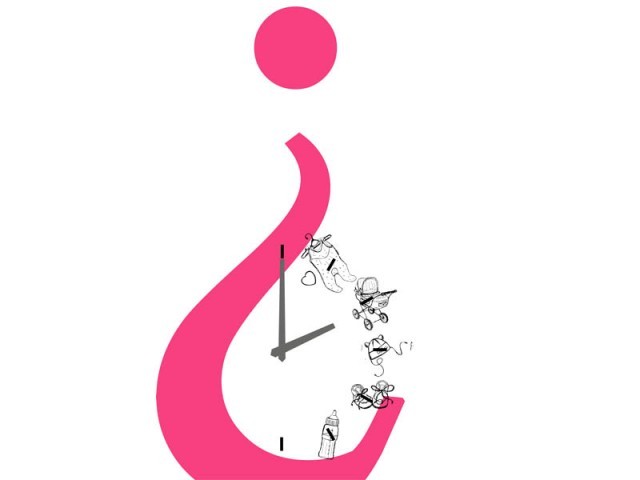 The right time to start a family may actually be just a myth...

As Pakistan gradually transitions from traditional values to a more modern lifestyle, women across the country are acquiring greater say in decisions regarding their families and careers. The average Pakistani woman today is stronger and much more independent than before, having mastered the art of balancing her personal and professional life.

Nonetheless, she continues to face a challenge when it comes to the all-important question of when she should become a mother. Professional empowerment has encouraged many young women to use their careers as an excuse to delay motherhood, claiming that it will only impede their development. Cases like that of 30-year-old former bank manager, Faryal Masood* show that more and more women are opting for family planning. “Obviously, I love my son with all my heart but that doesn’t change the fact that I hadn’t intended for him to come just yet,” confesses Faryal. “However, I would be lying if I said I don’t regret what motherhood has meant for my career. I was a rising star at my banking corporation but now, I spend my days changing diapers.” Despite this, Faryal is very keen to resume her job once her son is a little older. “Motherhood has set me back by at least three years. It will be a nightmare going back into the professional world!” she adds.

For many women, the decision still lies in the hands of their husbands, in-laws or fate, often leading to an unwanted pregnancy. In fact, some like 27-year-old student Mehreen Rameez* are blissfully unaware of the entire reproductive process itself, let alone how to prevent it. “I was a naive 18-year-old when I was married. I foolishly believed my husband when he said unprotected intercourse wouldn’t impregnate me right away,” Mehreen discloses. “That was then. My daughter is now nine years old!”

Of course, the situation is complicated further by the proverbial ‘biological clock’ that encourages many unprepared couples to have a child hurriedly. Such was the case of 38-year-old trade consultant Saman Bokhari* who married her colleague, 45-year-old Ali Bokhari* after a brief courtship. “Ali had been married previously so he wasn’t too keen on having another child with me but I knew I wanted children,” shares Saman. “As I was already 36 with an unfavourable medical history, my doctor advised immediate conception and hence, we took the plunge.” Despite this, Saman still maintains it was too early for Ali and her to become parents. “Ali is great, I love him very much. I wish we had had more time to consolidate our relationship, though, before having our future hinged on our son.”

Fortunately or unfortunately, 22-year-old graduate Aliya Madni* had a similar experience except that she barely knew her husband Rashid Madni* prior to their marriage. To make matters worse, the newly-weds relocated immediately after the wedding which made it hard for Aliya to acclimatise to the new life. “I was in a new city with practically a stranger who left for work in the mornings and came back at night,” recalls Aliya. “Soon, both our families started to pressurise us for grandchildren, especially since Rashid didn’t allow me to study or work and I was mostly bored at home. I knew I wasn’t ready for a baby yet but succumbed to the pressures anyway.” With her first child due in a few months, Aliya has been busy keeping up with her pregnancy but unfortunately, still remains largely unfamiliar with Rashid. “He is the father of my unborn child and yet, I feel like I don’t really know him,” she complains.

In Pakistan, it is still common for the elders of the family to prescribe children to seal the deal on marriages.  Society assumes that once a couple has children, their connection will solidify and intimacy will flow naturally. While this may be true for many couples, examples like Aliya’s experience prove otherwise. “Becoming parents is the toughest job you will ever do and so, shouldn’t be agreed upon simply out of compulsion or to rectify marital problems,” explains 31-year-old housewife Saadia Kamran*. Both of Saadia’s sons were born following serious altercations that had made Saadia leave her husband and return to her parents. “Both times, Jameel* and I fought and I left. He came to take me back and I complied. We thought we should patch up by conceiving but sadly, we were very wrong.” Women like Saadia continue to suffer in a bad marriage due to ill-planned pregnancies. “I am far from satisfied with Jameel,” admits Saadia. “His anger issues get so bad at times that my sons start crying! I wish we had thought parenthood through or waited until we were okay with one another.”

What is common amongst all of the women mentioned above is that none of them were staunchly against motherhood. They had hoped to become parents sooner or later and the misfortune that befell them was purely coincidental. Most women are certain they want children someday and a small number are absolutely positive that they don’t. However, there is another, tiny group of women that is rarely talked about in public: the ambivalent. Women like 33-year-old teacher Sonal Irshad* who fall in this category are unsure of whether they want to start a family or not, vacillating between “I don’t feel obligated to have a baby” and “What if I regret not having a baby when I am older?”

“It’s not that I don’t like children. I just don’t feel any deep, maternal, biological need to procreate,” shares Sonal. “I think there are plenty of us feel so and wait for absolute surety before conceiving.” The mental debate for this group of women isn’t simply due to career aspirations, search for the perfect husband or any other mitigating circumstance — they are genuinely confused about whether or not to have children and if yes, then when would be the right time to do so. According to Laura Carroll, author of parenthood and reproduction guide The Baby Matrix, “There’s no evidence that women have a biological urge to procreate. Humans are the only animals that can choose whether to spawn or not.”

“I have always been very career-oriented and never prioritised motherhood — or even marriage for that matter — and look how I turned out,” says Faryal. “Yes, my career has been stalled a bit but I can always get back on board! I am glad I took the leap of faith and wouldn’t have it any other way.” Faryal admits that in retrospect, it was probably her intense fear of childbirth that made her put off motherhood, subconsciously hiding behind her career. As for the ambivalent, Faryal advises some research and soul-searching before arriving at a decision. If someone is unsure, they should sort through their feelings and address the issue properly. ”

Amongst the examples above, all the women claim to love their children but the fact remains that would they say the same if they weren’t biologically wired to? The question that whether or not there is a right time or situation to start a family remains unanswered. Everyone has their own two cents to add to the jar — some would suggest jumping into it while others would advise waiting for the next promotion to come through before getting pregnant. Perhaps the answer lies in the subjectivity of the matter — some women have a tough time raising children. While others can’t seem to get enough of it. Regardless, of course, no amount of waiting for the right time can guarantee that.

A quick guide for new parents

•  Picking up your baby when they cry won’t spoil them. According to Maurice J Elias, author of Emotionally Intelligent Parenting, it is imperative that you pick your baby up each time they decide to throw a hissy fit. This is because during the first few months of their lives, babies need to be assured that they are cared for and given the confidence that their parents will respond to their needs.

•  Sugar does not make children hyper. Thus far, there is no scientific evidence that proves that sugar gives children a high. In fact, an adrenaline surge may be caused by any other food that affects their blood-sugar level; it doesn’t have to be sugar or foods rich in it.

•  “Because I am your mother and I said so!” Many parents believe that telling their child who is in charge sparks rebellion and harms the relationship they share. In reality, it is very helpful in disciplining youngsters. If your child is being unreasonable or disobedient, feel free to reprimand them. However, be sure to do so in an authoritative rather than frightening manner and it is likely to be more effective and beneficial in the long run.

•  Bribing children is a bad idea, let alone young, impressionable children. However, if you do not use it regularly it is harmless. In fact, try to avoid it unless you see no other way out.

•  Dont fight in front of your children. Fighting between parents is normal in every household but excessive fighting can affect your toddler a great deal and make him think he is the reason for the conflict. Children believe their parents are perfect and fighting distorts their views. So next time you feel ready to blow off some steam on your spouse, take it to another room!.