They fought for us, we built their statue­s and then forgot about them
By Z Ali
Published: October 9, 2014
Tweet Email 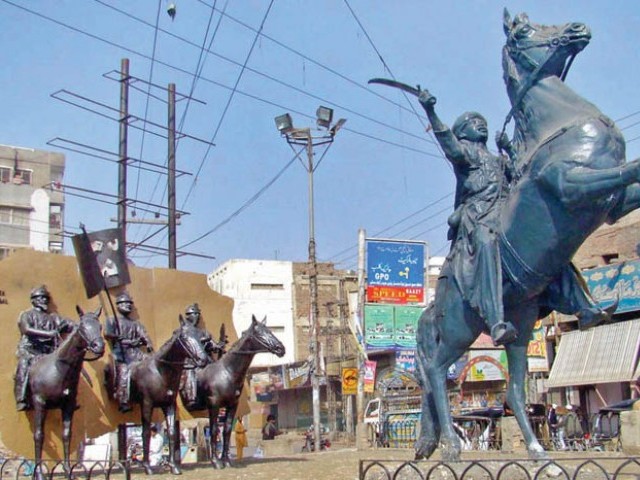 Sheedi, who fought against the British to protect Sindh, lost his sword (left) to some political activists who replaced it with a party flag (right). PHOTOS: EXPRESS

Pakistan Peoples Party’s chairperson Bilawal Bhutto Zardari has put on the map the slogan ‘marsoon marsoon Sindh na desoon’ [we will die but will not give up Sindh]. What few people know is that the now-famous catchphrase was coined during a battle against the colonial British army in the 19th century.

The Talpur army’s general, Hosh Muhammad Sheedi, popularly known as Hoshu Sheedi, coined the term to inspire the soldiers who were faced with a well-armed and disciplined British army in the battle of Dabbo. He laid down his life in the fight along with his compatriots on March 24, 1843, in Miani Forest in Nerunkot (the old name for Hyderabad). Sindh’s historians have always held Sheedi in great reverence. The Sindh government has also named some structures, such as flyovers and roads after him, besides introducing him into the academic curriculum. What is devastating is the fact that his monument in Hyderabad, inaugurated during the former Nazim Kanwar Naveed Jamil’s district government in April 2009, has been imperiled by sheer neglect since. The monument, built in a triangular enclosure on Risala Road in the centre of Hyderabad’s City tehsil, reflects his posture of leading the soldiers. The small piece of land where Sheedi sits mounted on a horse along with three companions, remains littered with garbage. The district government had placed five iron boxes for spotlights which were never installed. A few days ago, someone even stole the sword that Sheedi carried in his hand.

The fate of other important monuments in Hyderabad is no different. The municipal administration responsible for their upkeep cites funds constraint to wriggle out of ensuring their regular maintenance.

“There is no separate budget for the maintenance of these monuments,” Hyderabad Municipal Corporation’s (HMC) administrator Zahid Khaimptio told The Express Tribune. “We do not even have trained staff to carry out the beautification work.”

Khaimptio, feebly attempting to excuse the lack of cleanliness around the monuments, said that the HMC was suffering from acute shortage of sanitation staff. “HMC clerical and other sections are overstaffed but the sanitation, where we actually need more employees, is very understaffed,” he claimed. “To make matters worse, we have not been paying their salaries on time due to financial constraints.”

No justification for lethargy

Shabbir Tabish, a journalist who has done extensive work on heritage, culture and history of Hyderabad finds the HMC’s excuses unsubstantiated. “After their inauguration, the Nazim used fire tenders to wash these monuments regularly. The municipality was dealing with the same financial problems at the time.” He claimed that the district government spent between Rs40 to Rs50 million to construct these structures. But all of them were soon consigned to neglect and subsequent decay.

The maintenance of a few monuments of the colonial era has also been ignored. Some years ago, the clock in the famous Clock Tower in Market area was stolen. The government installed a digital clock in its place. But even that has stopped functioning. “In the past, the municipality had an employee hired at Rs50 per day. His responsibility was to watch over the clock tower,” recalled Tabish.

Such dedicated staff can no longer be found around any monument in the district.