Burying the hatchets in Afghanistan

Burying the hatchets in Afghanistan

We wish the new Afghan govern­ment well, and equall­y wish for hatche­ts to truly be buried.
By Editorial
Published: September 23, 2014
Tweet Email 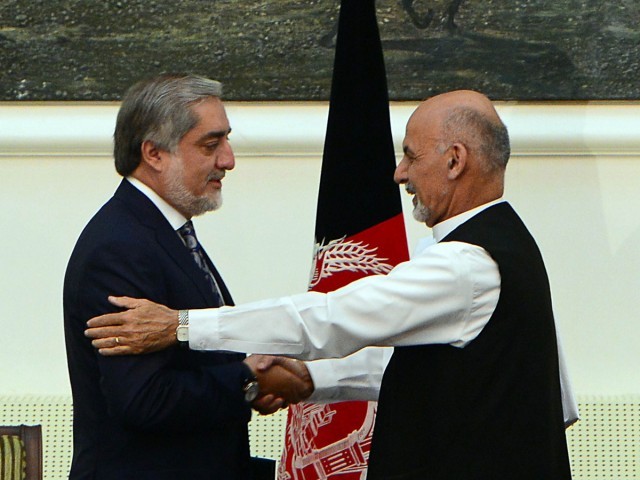 The origins of the phrase ‘burying the hatchet’ lie in the language of a Native American tribe called the Iroquois, and are first recorded (in French) in 1644. It is an expression that can be both literal and figurative, with real hatchets being buried as a symbolic act that signals the onset of peace or the resolution of a dispute. Hatchets in industrial quantities and of military-grade specification are going to have to be buried very deep if the announcement that Ashraf Ghani has been named as the Afghan president-elect on September 21, 2014 — is to produce a durable peace in a much-troubled country.

The announcement was made by the Independent Election Commission of Afghanistan which in an unusual move decided not to release the figures that would prove or disprove the victory of Mr Ghani, which itself may have sown the seeds of further dispute. The contest for the post of president has been acrimonious from the outset, made worse by a flawed original election and a second round that produced the demand for an audit of every ballot paper cast. The audit — which was agreed by both parties — was itself challenged but carried on regardless, eventually to produce this less-than-transparent result.

What has been brokered is essentially a power-sharing agreement between the two men, Ashraf Ghani and Abdullah Abdullah. Ghani is to share power with a chief executive who will be nominated by Abdullah who, it transpires, was the one to insist that the final figures not be released. He is widely believed to have been far behind Ghani in the audit of the votes, and would have wanted to save face. Electoral rigging is a creature of many facets. The results are now delayed ‘to a later date’ — hardly a recipe for sweetness and light to break out and a hatchet that lies still on the surface.

The new president is due to be sworn in on September 29, and there is much detail work to be completed before then. The model of governance is untested but it is going to have to hit the ground running. The security pact with the US that has been stymied for months by president Karzai — needs to be ratified. This will allow foreign troops to remain beyond the 2014 deadline for withdrawal. Secondly, the role of the newly created chief executive has no ratification (or definition) in law. Thirdly, the economy is about to go over a cliff. Revenues are down by 30 per cent and will drop further as aid pipelines close. Fourth, donor relations, or the lack thereof. The confidence gap between donors and the donation-receiver which is of colossal proportions. Fifth, the Taliban, the extremely large elephant in the room. They remain undefeated, are able to mount attacks at will, and control large swathes of the country in the south and east. They may — or may not — be open to re-opening talks.

Ghani is seen as a reformist, and may have made inroads in terms of popularity into the Pakhtun community that voted for Abdullah. The audit would have revealed that if true, much to the chagrin of Abdullah. The deadlock between the two men is more than being about a clash of egos — which it is as well — but is based on profound cultural and ethnic differences that have long been behind the swinging of hatchets and their subsequent burial in the skulls of the opposing parties rather than beneath a lonely tree and accompanied by a smoking of the pipes of peace.

The five points outlined above are the sketchiest of outlines of the agenda for the incoming government. Foreign relations, not least relations with Pakistan, are on the ‘to-do’ list, likewise relations with China and India, a complex and volatile matrix that will require deft handling. We wish the new Afghan government well, and equally wish for hatchets to truly be buried. In the ground.