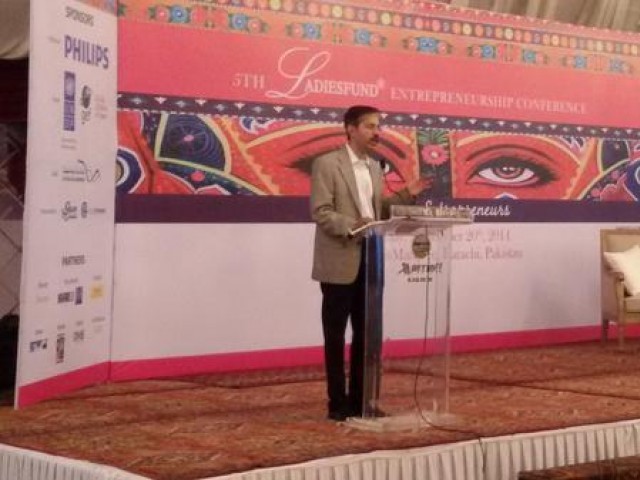 LEC’s theme this year was “Extreme Entrepreneurship” and featured local entrepreneurs and speakers from around the world. PHOTO: @DAASPK

KARACHI: Speakers emphasised on the role of women pursuing careers in a male-dominated workforce, breaking cultural barriers and the role of human resource in facilitating the gender, at the 5th Ladiesfund Entrepreneurship Conference (LEC 2014) held at a local hotel Saturday.

LEC’s theme this year was “Extreme Entrepreneurship” and featured local entrepreneurs and speakers from around the world.

Comprising four sessions, the conference focused on how women entrepreneurs can efficiently start their business, brand their product and market it. The event also highlighted, recognised and applauded women who stepped out to pursue their careers.

Asma Yousuf, Unilever’s head of the human resource department, explained the HR policy changes that have been introduced in the company to facilitate working women like increase in maternal and paternal leave, building nurseries at workplace, and an ‘agile working’ policy that allows women to temporarily work from home.

Talking about the current economic  crisis in the country, film maker and activist Iara Lee said, “Pakistan is full of resources, and the earning out of these resources should only trickle down to Pakistanis.”  Giving Congo’s example, she urged the people not to let multinational firms take over their resources and get away with gains.

Meanwhile, German Consul General Tilo Klinner said, “If things said on a regular basis in print had actually happened, this country would have been achieved much more in development. There is still not enough money coming into the education system, if you compare it with all kinds of different budgetary lines, education still ranges somewhere down the line.”