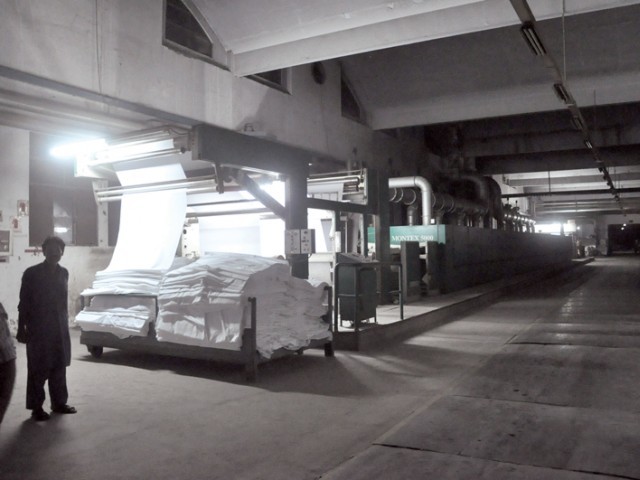 The Chenab Group of Industries would want to forget the year 2007.

Considered as one of the leading manufacturers of textile goods in the past, Chenab Group owns Chen One – Pakistan’s first home textile brand having 29 branches in the country and abroad. The Group also owns and manages several other companies such as CGI Limited UAE, InterFab in Australia, Chenab Fibres Limited, ChenSoft, Chenab USA, ChenOne Worldwide, House of Chenab and ChenOne Foundation. Once a shining star, boasting annual sales of Rs9 billion, the Group’s slide began seven years ago. While it is desperately looking to claw its way back, lack of working capital is proving to be a massive hindrance.

In 2006-07, Chenab Limited recorded sales over Rs9 billion and was eyeing the Rs15-billion mark by the following year. Suffice to say that the dream never bore fruit as various issues caught the Group off guard.

Mian Latif, the chief executive officer, was asked the reasons behind the fall and if the Group could re-emerge from the slide.

Latif’s family had an agricultural background before it established industries. The CEO’s forefathers had moved from what is now a part of India, settling in Toba Tek Singh in 1883.

Fast forward to the 20th century

In 1973, after completing graduation, Latif set up a small-scale business – a power loom factory in Toba Tek Singh. Sixty power looms were installed as the first step was taken towards success. Chenab Textile Mills, the first weaving unit, was setup and marked a big day for Latif.

Two years later, Chenab purchased a sick unit in Faisalabad. The unit was spread over six kanals before Latif expanded to an area of 280 kanals.

The unit started exporting gray fabric and in 1985, exports were worth Rs135 million. In 1995, earnings reached Rs2 billion. In 1998, exports grew to Rs3.5 billion. The earnings helped him clear all outstanding loans.

During 1990 to 2000, he had also purchased another two sick textile units at an investment of Rs300 million.

This was the time when Latif was busy in expanding production capacity. The year 1998 saw the company earn a net profit of around Rs400 million.

By now, Latif had made a name for himself. A good reputation followed in the international market including Europe, UAE and Australia but the dream was to penetrate the US.

Latif went after the dream. What ensued was knocking on the doors of banks in search for loans. Production capacity had to be increased and hence, heavy machinery was imported.

By 1998, Latif introduced Chen One in Pakistan and abroad.

The CEO recalled that, at the time, flow of capital was not an issue. State-of-the-art machinery was imported as quality assurances were given to the international market. That was the only way to penetrate.

Even today, the Group has the distinction of owing 24-colour Rotary machines in Pakistan, labelled the best manufacturing machines in the world.

In 2004, the Chenab Group purchased another industry where Latif installed the Chen One furniture factory. This was and remains the first automatic furniture plant in Pakistan.

In 2004-05, exports grew to Rs5 billion, Rs6 billion a year later before reaching its peak in 2006-07. Exports were increasing and the company, on a high, set a target of Rs15 billion for next year.

What followed is, as they say, history.

The fall of Chenab Group

“It was not a big issue for the Chenab Group to payback the loans to the banks,” said Latif. “The Group’s bank record was remarkable and it never delayed paying loan instalments to banks.

During the time, load-shedding was at a minimum. The period between October to January is considered a peak season for the textile industry.

“This is the time when we have to deliver our textile orders for Christmas and the New Year. We strive to fulfil our commitments at any cost.”

At the time, the Group had bulks of textile orders from world’s biggest stores.

The factories suffered the first setback when they faced gas cuts from October 15, 2007 to November 1 after a fault in the Qadirpur gas fields, bringing down production.

By the time supply was restored, the damage had been done. The supply chain was broken and Latif said an alternative did not exist. “We did not have an alternate source to produce steam to run our units and that delayed the shipments.

“We were unable to meet deadlines and could not arrange deliveries from the market as not even a single unit in Faisalabad had 24-colour Rotary machines.

“The irony is that the technology and quality assurance that helped the Group flourish became the first hurdle and the first step towards the collapse as well.”

The Group tried to manage alternate sources of energy and arranged to deliver the biggest order to a leading store chain in Germany. “But we missed the orders from America and other countries, causing the Group to pay big penalties.”

They say that it could not get any worse but it did for the Chenab Group.

“We dispatched orders of a German company that owned 1,400 outlets in the country alone. The orders were dispatched in 107 containers and made their way from Faisalabad dry port to Karachi. Out of those 107 containers, only 37 reached Germany.” The reason was the assassination of Pakistan People’s Party Chairman Benazir Bhutto in December that year, which resulted to riots across the country. The remaining containers could not be delivered on time and the German company filed a case and won €5 million in damages.

“As many as 37 containers were returned to Chenab Group after a year. We had to bear huge losses.”

During 2007-08, the Group sustained Rs4 billion in losses. “We tried to convince banks to give working capital but the banks refused to deal with us,” said Latif.

He said Chenab was making interest payments till 2010 but no bank was willing to issue working capital.

“I tried talking to banks but they refused to extend financing. Last year [2013], two banks rescheduled the loan for working capital of Rs370 million on terms that the Group will pay interest on the new rescheduled loan and 7% from the NPL capital amount. In this agreement, we would NPLs in the next 10 years.”

Answering a question, he said three banks filed cases against the Group, seeking an auction. “But, we said we are ready to pay the loans if the banks re-considered their terms and conditions.”

Latif added that Chenab owes the banks Rs9 billion and the value of the Group is far higher than this.

“The Group needs just Rs2 billion for working capital and we can re-start from our previous position within a year but no bank is willing to come forward,” said a dejected Latif.

Currently, the Chenab is operating at less than 25% capacity with 3,000 employees, supplying goods to Chen One stores and meeting requirements of a few international ones.

“Textiles industries that are still surviving do business in multiple files while Chenab Group was flourishing on the back of processing industries. Exports orders of yarn and gray cloth can be managed from the market but orders comprising garments and home textile products have to be arranged from our own factories.”

Buyer preference: 1.8L engines may win a race but 1.3L ones remain ahead