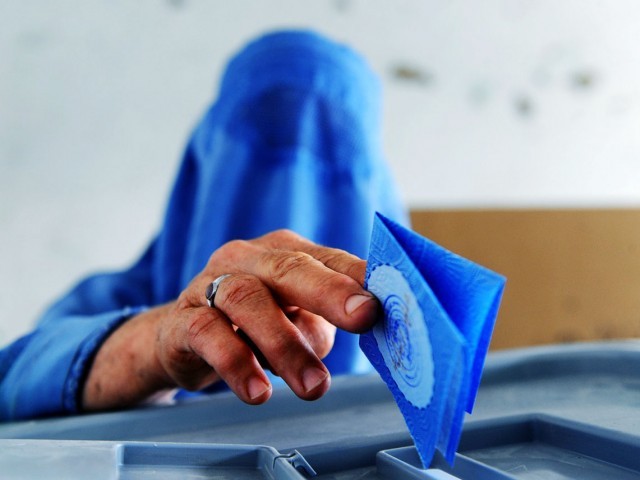 A UN official in Islamabad said, “Ján Kubiš briefed Pakistani officials on the latest situation of the political transition and audit process and updated himself about their views.” PHOTO: AFP

ISLAMABAD: Outgoing Afghan President Hamid Karzai wants to transfer power to the new leader on September 2 in the country’s first ever democratic transition. However, the United Nations now says the anti-fraud audit of nearly eight million ballots from the June presidential runoff could be completed around September 10 under its supervision. This means the swearing in of the new president is likely to face another delay.

The audit process was disrupted again this week after Dr Abdullah Abdullah pulled out his observers from the audit process, claiming their demands to broaden the criteria to identify fraud were not entertained by UN supervisors.

The UN regretted Dr Abdullah’s decision to not participate in the audit process and encouraged reviewing this move.

UN Secretary-General’s Deputy Special Representative to Afghanistan, Nicholas Haysom said this week that the process will now proceed to its conclusion without the direct engagement of representatives of either presidential candidate in the physical audit.

“The UN believes that both the 100% nationwide audit and the formation of a government of national unity are vital pillars to achieve a credible electoral outcome and a peaceful transfer of power that millions of Afghans [have] voted for,” a UN statement quoted Haysom as saying.

Following Abdullah’s decision, the UN mission in Kabul requested the team of Dr Ashraf Ghani to review its own participation in the interests of protecting the integrity of the audit process. Ghani’s team also subsequently withdrew from the process and election authorities continued the audit process after a brief pause.

The Independent Election Commission (IEC) on Friday said about 76% votes have been audited and recounted and that the process is ongoing. IEC spokesman Noor Mohammad Noor, however, did not give any specific date for announcement of the results.

Earlier, US Secretary of State brokered two deals between rival candidates to carry out the audit of all votes and to form a government of national unity.

On Thursday, UN Secretary-General’s Special Representative for Afghanistan, Ján Kubiš, briefed President Karzai on the progress of the audit process and said a rigorous and credible audit required time, but could be completed around September 10.

“Following all necessary steps, as required by law, the inauguration of the new president should then be possible soon after,” a UN statement said following Karzai’s decision to transfer power to his successor on September 2.

President Hamid Karzai had earlier also assured the Nato leadership that the new Afghan president would participate in the alliance’s summit on September 4. The summit is considered very important as Nato will focus on the withdrawal strategy and Afghanistan’s security after the 2014 endgame.

Dr Abdullah and Dr Ghani agreed in July to resolve their contest through a complete audit of votes cast in the June run-off elections. The purpose of the audit—secured with the assistance of US Secretary of State John Kerry—was aimed at separating fraudulent ballots and to determine the will of the millions of Afghan voters.

As political tension continues to mount in Afghanistan, the United Nations has also sought Pakistan’s support for a smooth political transition.

A foreign ministry official said the UN representative “sought support of all the neighbors of Afghanistan for the political transition in the strife-torn county. Pakistan reiterated its resolve in helping those efforts.”

A UN official in Islamabad said, “Ján Kubiš briefed Pakistani officials on the latest situation of the political transition and audit process and updated himself about their views.”

“Pakistan’s response was very positive as senior officials reiterated their support for a peaceful political transition,” the official told The Express Tribune on Friday.

Efforts are under way to address the disagreement between the two electoral camps, but a section of the Afghan media is still skeptical about the election dispute.

“Both presidential candidates should pay attention to what they had agreed upon, otherwise it will be difficult to manage the fight against the Taliban without establishment of a national unity government and ensuring democratic legitimacy of the future president,” stated the independent Hasht-e Sobh. “This time, the biggest threat to Afghanistan is the Taliban … The electoral camps should also consider these issues and make efforts to address differences fundamentally,” the paper said in its editorial this week.

Besides differences over the audit process, there are still problems over the composition of the government of national unity.

Private daily Afghanistan said although the negotiating teams have made good progress during negotiations and have solved misunderstandings, disagreements and differences in opinions about words and terms, they could not address differences over the authority of the chief executive.