Book review: Observing the Observer - faith in the classroom

Book review: Observing the Observer - faith in the classroom

If Islam is not confin­ed to one territ­ory, then why should its study
By Faiza Rahman
Published: August 31, 2014
Tweet Email 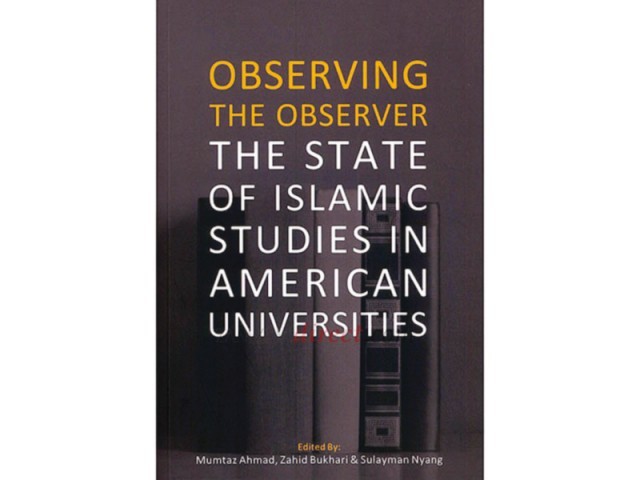 If Islam is not confined to one territory, then why should its study.

With the intellectually-humble discussion on Islam fast becoming a casualty of bickering and blood-letting, the university classroom is the last opportunity where some semblance of justice can be done. Most well-reputed universities today claim an environment of unhindered inquiry to help the young religious scholar negotiate the tricky terrains of scripture, sect and school without blowing gaskets, which makes the secular university the most fitting site for the study of Islam in today’s world. Observing the Observer: The State of Islamic Studies in American University is a compilation of essays by topmost Islamic Studies scholars, who are aware of these realities and of the grave responsibilities borne by their course outlines in an era where faith-based quarrels are drenching entire regions in blood and a newfound but fearful curiosity is causing enrolment databases to overspill in most Islamic, Middle Eastern and Near Eastern Studies departments of US universities.

That’s the problem, right there. Key scholars of Islamic Studies in the US, such as Seyyed Hossein Nasr of George Washington University, John Voll and Zahid Bukhari of Georgetown University and Faisal Islam of Brandeis University, are apprehensive of the trend whereby those who wish to be schooled in the study of Islam seek out departments that teach the culture, language and history of the Middle East. A number of such university departments in the US offer throwaway courses in Islamic Studies that are taught in an offhandish manner by those specialising in the culture and history of just one of the many Muslim civilisations, thereby entrapping all the nuance and vastness of religion in a suffocated, intellectually-guarded cocoon. As Seyyed Hossein Nasr points out, many graduates in Islamic Studies churned out by Middle Eastern Studies departments are alien to the religious life, culture and contributions made to Islam by several hundred million Muslims in South Asia, China, Malaysia and Africa. “One can attain the highest degree in Islamic Studies and yet not know about the great Islamic empires of Mali,” he writes.

The abovementioned essay writers would agree that unlike studies in Judaism, Christianity or Hinduism, the study of Islam has been reduced to the study of a certain geography. Nasr and Voll are particularly forceful in arguing that Islam should not be treated as a mere social or cultural phenomena at universities, but as a wholesome religion whose study demands exhaustive application to symbols, sources of law, philosophy and theology. The first step towards such a track of study is to place the discipline of Islamic Studies at either a specialised Islamic Studies department, or to offer it at a department of Religious Studies where faculty members specialising in areas of fiqh (Islamic jurisprudence), tafseer (exegesis) and Sufism are assigned courses according to their research work.

Even in university departments that cater exclusively to Islamic Studies, a number of theoretical ‘mistakes’ are made while teaching certain kinds of courses. Courses such as ‘Islam and the modern world’, ‘Islam and modernism’ and ‘Islam and the West: a confrontation’ come with titles that are skewed by ideological baggage, with a punitive dichotomy established in the very name. Whole volumes of scholarship continue to argue that the ‘West’ or ‘modernity’ is not an anti-thesis of ‘Islam’ and this sea of scholarship is not fairly regarded by those who devise such titles.

Moreover, a myriad of Islamic scholars in the US continue to use the Western intellectual tradition to engage with Islam, trying their best to make it palatable to a Western student body by jostling it into the stiff theoretical constructs of Orientalism. This reduces the entire academic exercise into something of a pathetic apology. Overall, Observing the Observer: The State of Islamic Studies in American University is a treasure for anyone who seeks to read critique on one of the key spaces of the study of Islam — the American university.

Faiza Rahman is a subeditor for the Opinion & Editorial pages of The Express Tribune.

The new Khan gets casual about bollywood