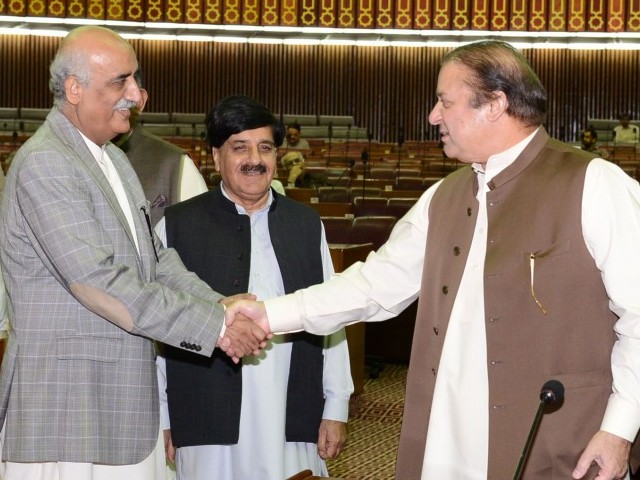 Parliamentary leaders of all major parties, with the exception of the PML-N, held a meeting in the chambers of opposition leader Khursheed Shah on Monday where they decided to play a mediatory role in settling the ongoing political crisis in the country.  As a first step, they nominated PkMAP leader Mahmood Khan Achakzai to bridge the gap between the opposition and the government.

The parties also agreed to nominate a ten-member committee to hold talks with the Pakistan Tehreek-e-Insaf (PTI) and the Pakistan Awami Tehreek (PAT) to resolve the political crisis. But it was a session of observations and advice as well with some party members criticising the PTI and others blowing hot on the ruling party.

If there was unanimity of views it was on the supremacy of parliament when party representatives reiterated their resolve to protect the institution from any anti-democratic move from any side.

It was also a time for Prime Minister Nawaz Sharif to keep quiet and listen to what was being said. He attended Monday’s proceedings but did not speak throughout the session, instead restricting his participation to thumping the desks to applaud the decision of the opposition party leaders in finding a political solution to the problems faced by the government.

After the speeches of the parliamentary leaders, Defence Minister Khawaja Asif stood up to announce a policy statement on behalf of the ruling party. He said that the government would accept any proposal or procedure for settlement given by the opposition.

He also informed the house that Prime Minister Nawaz Sharif had formed a five-member committee which will hold direct or indirect dialogue with the aggrieved parties. The committee will comprise four cabinet members: Ahsan Iqbal, Khawaja Saad Rafiq, Akram Khan Durrani and Abdul Qadir Baloch. It will also have on board a special assistant to the PM, Irfan Siddiqui.

In his speech, opposition leader Khursheed Shah said that he had “all the respect for Imran Khan” and that the PTI leader’s comments against parliament can be result of “personal sentiments.”  Shah urged members of the assembly to pursue the politics of reconciliation.

“We are not a friendly opposition but we are with the system, with the parliament, the constitution and with democracy.”

Directly addressing the prime minister, Shah noted that there should not be any communication gap between the PM and his confidantes. Despite his busy schedule, the PM should take immediate decisions after consulting a few select ministers, he said.  Shah recalled with some satisfaction that former president Zardari and former prime minister Gilani would act quickly and decisively in such situations.

In his speech, Ghulam Ahmad Bilour of the ANP said that the reasonable demands of Imran Khan should be accepted and government should accommodate him to end the fiasco. At the same time, Bilour also criticised what he called the poor performance of the PTI in Khyber-Pakhtunkhwa province.

Taking this cue, Akram Khan Durrani of JUI-F said that shameful change had been introduced in the province. Durrani also wondered why Sufi Muhammad, a provincial figure, was in jail for civil disobedience if the government was not taking any action against Imran Khan for the same crime.

Not to be outdone, the Jamaat-e-Islami’s Tariqullah said that his party will not ask the government to step down and instead will wait for it to complete its five years and then face the public once again. “We want to see democracy flourish,” he added. The house will meet again on Tuesday.