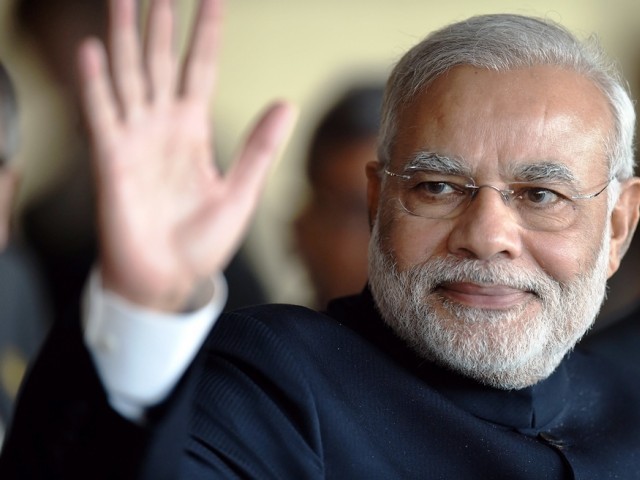 India’s Prime Minister Narendra Modi accused Islamabad on Tuesday of waging a proxy war in Kashmir during his maiden visit to Kargil, scene of a deadly 1999 conflict with Pakistan.

Modi landed in the remote Himalayan town a day after the two sides traded accusations of ceasefire violations on their border in Kashmir.

New Delhi has repeatedly accused Pakistan of intruding the Kargil area 15 years ago, a move that triggered confrontation between the two countries killing 1,000 on both sides.

Since 1999, India has maintained a heavy military presence in Muslim-majority Kargil in the mountainous Kashmiri region of Ladakh.

But a reporter at the scene said there were few soldiers on the streets of Kargil on Tuesday.

“Today when I came I heard the cheerful claps of the people,” Modi told the 5,000-strong crowd in the town, which was festooned with flags from his Bharatiya Janata Party (BJP).

Speaking earlier to soldiers in Leh, capital of the Ladakh region, Modi condemned what he called a “proxy war by Pakistan”.

He said troops were “suffering more casualties from terrorism than from war”, according to the government’s Press Information Bureau website.

New Delhi has long accused Islamabad of using Pakistan-based militant groups such as the outlawed Lashkar-e-Taiba against its forces in Indian Kashmir — a claim that Islamabad denies.

Modi’s visit came a day after Pakistan summoned a senior Indian diplomat over a cross-border firing incident near the city of Sialkot.

In a separate incident, a Telangana Rashtra Samithi (TRS) Lok Sabha member from Nizamabad, K Kavitha, was booked on sedition charges for declaring that Jammu and Kashmir is not part of India.

On the direction of a city court, a first information report (FIR) was registered against Kavitha, who is also the daughter of Telangana Chief Minister, K Chandrasekhar Rao, at the Madannapet police station in Nizamabad, Kashmir Media Service reported.

Kavitha has been booked under charges of sedition, promoting enmity between different groups and doing acts prejudicial to maintenance of harmony under various sections of the Indian Penal Code.