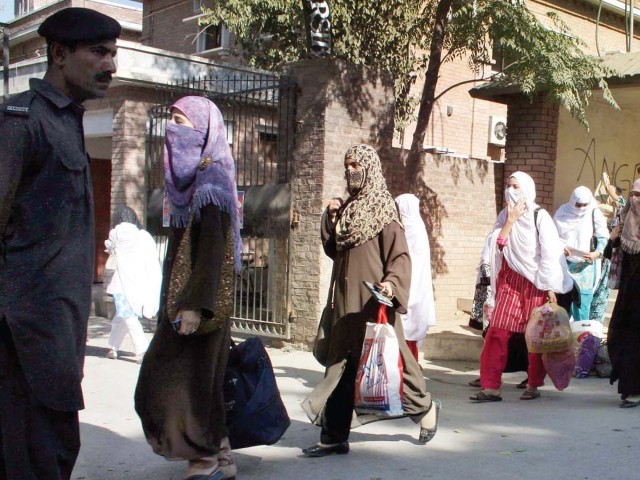 Students of Peshawar University return to their hostel as their university was closed. photo PPI

PESHAWAR: University teachers across Khyber-Pakhtunkhwa on Monday boycotted their classes to protest the non-recovery of the vice-chancellor of Islamia College University Peshawar, Professor Ajmal Khan.

Teachers from the University of Peshawar (UoP), Khyber-Pakhtunkhwa Agricultural University, University of Engineering and Technology (UET) and Islamia College University (ICU) boycotted classes and protested against the kidnapping of Prof Ajmal.

In Dera Ismail Khan, teachers of the Gomal University also boycotted their classes.

Prof Ajmal was kidnapped along with his driver on September 7 from the Professors Colony, while he was on his way to the office.

Peshawar University Teachers’ Association (PUTA) President Dr Johar Ali told journalists that the decision was taken in an emergency meeting on Sunday night, following the release of a second video of the abducted VC.

Ali said the teachers waited when the first video of the kidnapped vice-chancellor was released on October 14, and did not give any deadline to the authorities for Khan’s recovery. Monday’s meeting was attended by the representatives of all teachers’ associations of different universities, including Federation of All Pakistan Universities Academic Staff Association (FAPUASA), he said.

“Ajmal Khan is a teacher and is one of us. We will not wait any longer for his release,” Ali said.

He regretted that the government did not take the teachers or the VC’s family into confidence on the issue. Ali warned that if the authorities did not take concrete steps for the kidnapped VC’s release, they would give a call for a countrywide strike.

Jehanzaib, a teacher at Islamia Collegiate School, an affiliate institution of ICU, said they had closed down student hostels. He added that teachers will not attend any classes till Khan’s recovery and will only perform administrative duties during the protest.

Talking to reporters, Gomal University Academic Staff Association President Dr Mahmood Shah asked the government to not extend the provincial governor’s term, because he had failed to protect teachers and free the VC.

Meanwhile, students from remote areas of the province also started leaving for homes following the strike announcement. “I wanted to leave for my village a day or two before Eid, but I am leaving now as there is nothing to do here anymore,” Ilyas Ahmed, an MBA student from Chitral told The Express Tribune.

The Muttahida Talaba Mahaz also protested against the non-recovery of the kidnapped vice chancellor and took out a protest rally from Islamia College University.

On Sunday, militants had released a video of the kidnapped professor in which he said that militants would probably execute him by November 20, if the authorities do not meet his captors’ demands.

VC Islamia College kidnapped by Waziristan Taliban not us: TTP