A gang of robber­s allege­dly looted five people at the Jarwar link road in one day.
Published: November 9, 2010
Tweet Email 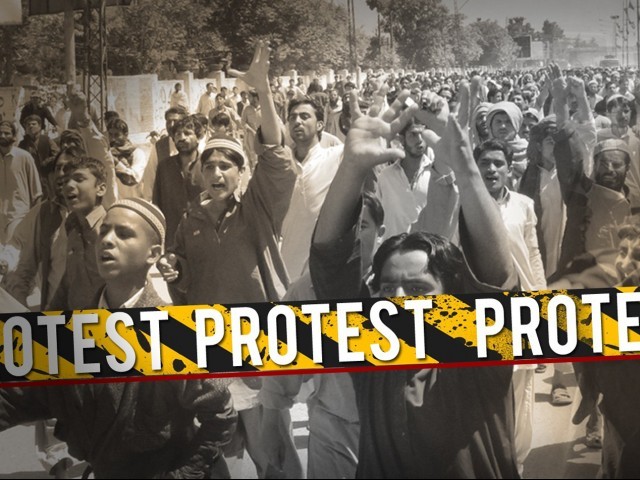 SUKKUR: A demonstration was held at the Bhagat Kunwar Ram Chowk on Monday in protest against robberies at the Jarwar link road.

A group of armed men blocked the Jarwar link road and robbed more than five people, after which they managed to escape. Among the people who were robbed was a Hindu trader, identified as Thakur Das, who was on his way to Jarwar on a motorcycle when he was intercepted by armed robbers. They snatched the motorcycle and Rs10,000 from him.

The robbers later stopped another motorcyclist, Rab Nawaz Loond, snatched his motorcycle along with Rs20,000 and a mobile phone and managed to escape.

Thakur Das and Rab Nawaz Loond claimed that the unidentified men had robbed three other people before robbing them.

Hearing this, traders and residents of Jarwar closed their shops in the area and took to the streets in protest. They shouted slogans against the police and conducted a sit in at the Bhagat Kunwar Ram Chowk.

A police team under SPO Mirpur Mathelo Muhsin Raza Jandan reached the scene and tried to reason with the protesters, who demanded an immediate arrest of the culprits. They also demanded that the robbed belongings and money be returned to the people.

The mob ended the protest after the SPO assured them of arresting the robbers and retrieving the looted goods.

Money is the missing clue in most investigations