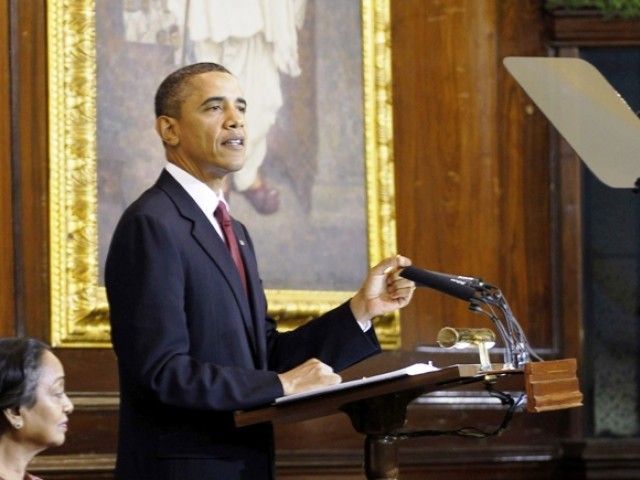 NEW DELHI: US President Barack Obama Monday backed India for a permanent seat on the United Nations Security Council, recognising its rise as a great power in a significant victory for New Delhi’s foreign policy.

‘The just and sustainable international order that America seeks includes a United Nations that is efficient, effective, credible and legitimate,’ Obama said in a speech to the Indian parliament.

‘That is why I can say today — in the years ahead, I look forward to a reformed UN Security Council that includes India as a permanent member,’ he added on the last day of his state visit.

Obama cautioned however that with increased power came greater responsibility and called on future Security Council members to ensure the body was effective, that resolutions were implemented and sanctions enforced.

Given the tortuous negotiations likely to make the body, set up after World War II, reflect 21st Century realities, many analysts believe it could be years before the new Council is formed.

Ben Rhodes, a deputy US national security advisor, said that the intention of the United States was clear, and based on India’s emerging role as a great strategic, economic and democratic power.

‘A clear statement like this from the United States is a very powerful signal,’ he said, adding that Washington had expressed support for Japan’s aspirations in the past, but had not done so for India.

William Burns, the top ranked US Foreign Service officer, said Obama’s statement was a ‘recognition of the obvious about India’s rise and significance’.

But he cautioned that the announcement on Monday was only one small step in a ‘very complicated and difficult process’ of reforming the Security Council underway at the United Nations in New York.

‘It is bound to take a significant amount of time.’

Britain, China, France, Russia and the United States are the only permanent members of the Security Council and can veto any resolution.

India has won a temporary seat on the UN Security Council and will take up the position for two years from January 1.

Momentum built in 2005 to reform the Security Council on the United Nations’ 50th anniversary, with Brazil, Germany, India and Japan launching a joint bid for new permanent seats.

But the initiative failed, with the then US administration of George W. Bush only publicly backing the membership of Japan, a longstanding US ally and major donor to the United Nations.

China, the only Asian nation in the Security Council, strongly opposed Japan’s membership by accusing it of not atoning for World War II.

It has since said it is willing to talk to India and Japan about Security Council reforms but has not supported the membership of either nation.