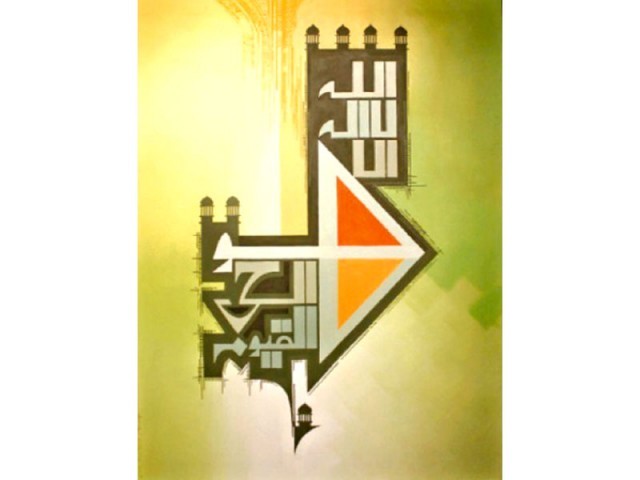 The pieces on display depict traditional as well as modern styles of calligraphy. PHOTO: EXPRESS

An exhibition featuring calligraphy by established and upcoming artists from across the country was organised at the National Art Gallery of the Pakistan National Council of the Arts (PNCA) on Wednesday.

“The exhibition is an attempt to keep the tradition of calligraphic art alive and to acknowledge the dedication and commitment of the calligraphers and painters who are continually practicing this art form and in turn, imparting the sensibility and sensitivity of the art form,” said PNCA Director General Intikhab Alam.

Over centuries, numerous styles of script have come to be associated with Arabic. Yet, the form of writing remains the same in all of these varied styles.

The “Six Pens” consisting of three pairs of large and small scripts were in use during the lifetime of Ibn Muqla (885-940) and still remain at the core of the art of calligraphy. These include thuluth-naksh, muhaqqaq-rayhan, and tawqi-riqa.

Muqla is remembered for calculating the heights of all letters in terms of the rhombic dot formed by the nib of a reed pin. His innovative method came to known as al-khatt al-mansub or “proportioned script,” which was manifest in many of the pieces on display.

The exhibition showcased the traditional style of calligraphy as preserved, promoted and propagated by the exponents of traditional as well as contemporary calligraphy.

Reminiscent of the calligraphic works produced across the Islamic world, the pieces on display depicted traditional as well as modern styles of calligraphy. Several eminent artists from the country have create works that follow international trends.

Two traditional calligraphy pieces by renowned calligrapher Khursheed Alam, who is considered a master calligrapher for his use of nastaliq, were showcased in the exhibition.

Aslam Kamal is famous for adding a modern touch to calligraphy while maintaining the profundity of Quranic inscriptions as well as the insightful message of the poetry of Iqbal and Faiz. His sharp, geometrical-shaped script, filled with vibrant, summery colours exudes a modern, yet classic feel.

Nsir Malik is celebrated as a multi-faceted, mix-media artist. Besides calligraphy, he is skilled in photography, computer graphics, animation, printmaking and his own creation “paintography” which merges traditional art with computer-generated graphics to conserve time and energy spent on preparing a painting. He commented that the merger of calligraphy, which was initially taught as an academic subject, with the practical medium of painting is a positive step in the creative arts.

Meanwhile, Bushra Zeeshan, a calligrapher and interior designer, showcased her kufic art pieces in the exhibition. Using mix-media and gold leaf, she rendered a Quranic verse and the name of Allah on canvas.

Tahir Bin Qulander, an alum of the National College of the Arts in Lahore, was also among the featured artists. His displayed calligraphy involves acrylic on canvas with application of silver leaf. Qulander has been trained under by Qalam.

Rehan Mukhtar, who is the third generation of calligraphers in his family, showcased the khat-e-sumbali, scratch work and silver leafing in two of his calligraphic works on display.