Book review: Still counting the dead - burying your head in the sand

Book review: Still counting the dead - burying your head in the sand

France­s Harris­on remind­s the world of a brutal war that it would much rather forget.
By Maheen Sabeeh
Published: July 20, 2014
Tweet Email 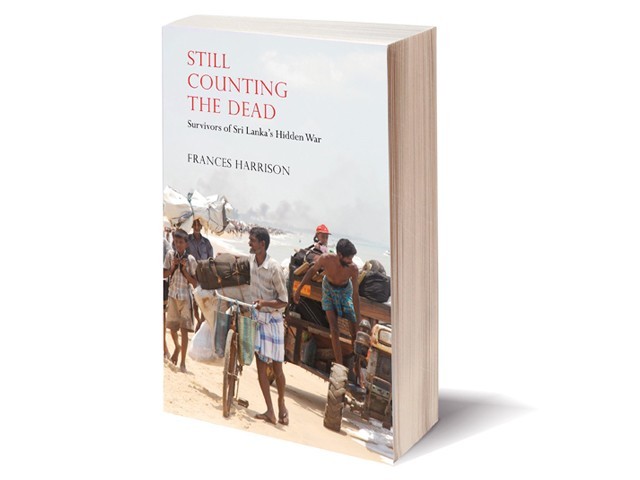 Available at The Last Word Books for Rs950.

— The Book of the Dead by Janine Di Giovanni

From the introduction, Harrison is clear that the book is a snapshot of the ‘final’ months of the civil war. The aim, as she explains early on, is not to spend time looking into excruciating details that led to the war in the first place, but, rather, to report how the criminal massacre of thousands of innocent people went unnoticed and ignored by the world.

A brief yet significant timeline featuring specific events in Sri Lanka’s political history serves as an able historical guide for those interested in matters of origin. It begins from 1972 when “Vellupillai Prabhakaran forms a militant group called the Tamil New Tigers,” and ends in the middle of April 2012. And to map the various religious beliefs within Sri Lanka, Harrison writes in the introductory passages: “Predominantly Hindu and Christian, Tamils were the majority in the north, but the Sinhalese, who are Buddhist and Christian, formed a majority in the rest of the tiny island of 20 million people. Sri Lanka Tamil links to the 60 million fellow-Tamils who live just across the water in the Southern tip of the Indian mainland made the Sinhalese insecure.”

After giving some background, Harrison immediately delves into the subject matter. She cultivates extraordinary sources while writing this book; she speaks to British aid workers, Catholic priests, pro-rebel, on-the-ground journalist(s), ordinary Sri Lankans, those with sympathies for the Tamil Tigers, as well as those who got caught in the crossfire.

In the opening chapter, the world’s foremost international humanitarian organisation, the United Nations, comes undone. It’s hardly surprising given the United Nations’ checkered past of blithely watching while atrocities are committed on abandoned spaces in countries, but the numerical research makes it even more horrifying. British aid worker, Dixie, who had worked inside the rebel territory for four years as a UN aid worker, recounts the uncensored truth and is one of the many courageous voices Harrison spoke to. “We were leaving people under a tree with not much. They’d lost everything already,” she tells Harrison. “Tent displacements were the norm, and many arrived on foot. We would give them a hut. We kept finding people under mango trees.”

Political incompetence in the highest echelons is equally disturbing and comes undone as well. Harrison writes, “Many blame China — the largest arms seller to Sri Lanka and its biggest donor by 2008. Beijing remains openly supportive of Sri Lanka’s right to defend itself against internal threats, even at the cost of human rights. Other countries backed Sri Lanka including Israel, Iran, India, Pakistan and even the Maldives…” Lesser known British involvement in arming the Sri Lankan army is a daunting fact that is also revealed at one point in the book.

Personal stories also put the catastrophic statistics that Harrison uncovers into a clearer perspective. What makes this book so terrific and heartbreaking is that Harrison gets people to tell painful stories without passing crude judgment. A priest recounts seeing thousands of innocent dead civilians on his nightmarish journey to an army camp. People were made to beg to be spared from what can only be described as executions for no apparent reason other than bloodlust. Another young man recounts quenching thirst by drinking water from a fresh water pool filled with floating dead bodies.

It isn’t just a story of injustice, courage and compassion, it’s also about the animalistic nature of violence that turns soldiers into sadistic mortals: “As the survivors were driven out of the war zone later that night they saw hundreds of naked male and female bodies lined up on the ground, illuminated by lights powered by generators. The victorious soldiers were using mobile phones to take trophy photos of the dead rebels.”

Still Counting the Dead doesn’t shy away from putting the rebels under a microscope: “The rebels succeeded because they were ruthless — willing to obliterate challengers, even from their own side, and kill innocent Sinhalese civilians.” An eerily familiar footnote for many in Pakistan is the description of the lives of the poor Sinhalese who had no choice but to join the rebels: “Ordinary people lived with the constant threat of suicide bombers, terrified even to let their children walk to school.”

Forget everything you know about Sri Lanka. Forget the grace of Kumar Sangakarra — quite possibly one of the last gentlemen left in the cricketing world — and the sandy beaches, islands and the elephants. None of it begins to capture the blood-soaked ending of Sri Lanka’s decades-old civil war in 2009. By the time you finish reading this book, you’re hit with a sense of nausea because it is a scathing portrayal that discloses how the world abandoned millions of people stuck in war not of their own choosing. There are no victors, just casualties in a world where turning a blind eye to injustice is simply easier than taking a stand for the sake of humanity.