The family of a man who is believed to have died of unnatural causes at a Lakki Marwat internment centre has gone to court because they are not being given his death certificate and post-mortem reports.

In their petition, the family says that Piyo Gul was travelling from Daggar to Sadda Kurram Agency on November 3, 2011.

When he reached an army check post he was arrested. He was kept at an internment center in Lakki Marwat where he died. His body was handed over to his family on November 28, 2013.

The petition said that with a court order’s help they went to the internment center but officials refused to hand over the death certificate. The petitioners maintain that it was not a natural death.

On Wednesday, Peshawar High Court’s Chief Justice Mazhar Alam Miankhel and Justice Malik Manzoor Hussain directed Additional Advocate General Mian Arshad Jan, who was present in court, to submit a progress report on the death certificate, post-mortem report and whether the deceased was given medical treatment or not. 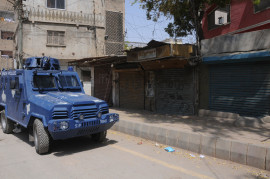 An unfortunate day: Five dead, as many injured in various incidents