Savage summits: Red-tape is the tip of the iceberg for this mountain

Savage summits: Red-tape is the tip of the iceberg for this mountain

K2 contin­ues to attrac­t climbe­rs whose fever to climb defies death and a mounta­in of paperw­ork to get there.
By Gibran Ashraf
Published: July 7, 2014
Tweet Email 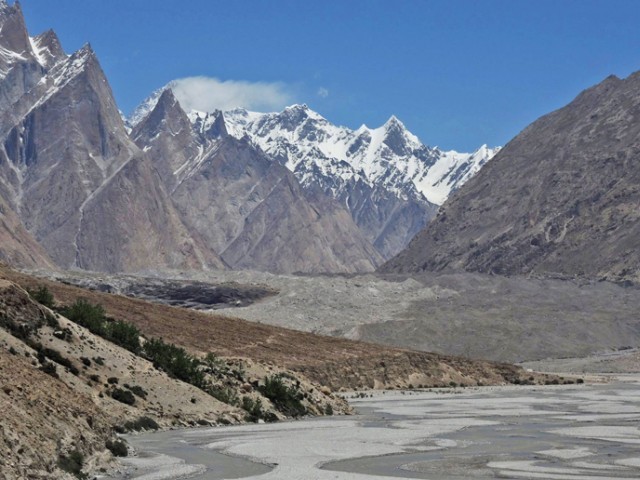 Askole, on the way to K2. PHOTO: ADRIAN HAYES

Sixty years ago, Lino Lacedelli and Achille Compagnoni became the first climbers to conquer K2. Since then, many more women and men have contracted the fever to undertake this challenge. But today climbers have to endure an entirely different mountain – of paperwork – before they can even think of getting to the base camp of the ‘Savage Mountain’.

The mountaineers continue, however, to pour into Pakistan, undeterred by last year’s violence in Diamer.

Twenty-eight expeditions are lined up and three of them have already started their ascent to K2. These climbers are welcomed by red-tape, bureaucracy and logistical nightmares which affect their acquisition of visas and permits and ability to catch a dependable flight from Islamabad to Skardu. They also need to find enough high altitude porters and liaison officers to go beyond Gondogoro-La pass. Asghar Ali Porik of Jasmine Tours, who has sent expeditions up K2 and Broad Peak, admits that processing for foreign climbers has become increasingly tedious, especially since the devolution of powers down the government structure. Local tourists, however, face none of these problems and are almost rampaging through the trekking zones since they don’t need permits or registration.

Foreign climbers are now required to secure their peak permits from the government even before they can apply for a visa. Their documentation has to be sent to the Gilgit-Baltistan council for clearance by different departments and sections which can take four to six weeks. It is only after the permit comes through and a military liaison officer has been assigned that the climber can start applying for a visa and make arrangements for stay and travel.

Once the climber is in Pakistan, the expeditions need to attend a briefing by the Alpine Club of Pakistan (and a debriefing at the end) and pay the fees for several departments such as the one for forestry in Gilgit-Baltistan. The team of climbers and porters (who are local or Nepali Sherpa) then start their trek but they have to stop at the Gondogoro-La pass army post. You can’t go any further without a liaison officer.

Expeditions of seven climbers each pay as much as $8,000 in government fees depending on the peak they intend to climb but the good news is that there has long been a policy to offer substantial discounts to make tourism attractive. The same largesse would perhaps be best extended to erasing the red-tape they face. It’s been worse this year, taking up to eight weeks for a permit, says Nazir Sabir, who was the president of Alpine Club of Pakistan. He adds that while he has attempted to work with high-ranking government and military officials on the security over the Karakoram highway, helicopter rescues and the closure of Gondogoro-La pass, little has changed on the ground despite their assurances. It will take a lot more than just a discount to keep up the tourism. The Nanga Parbat attack last year was a great set-back. Four of the climbers were Sabir’s clients. “[That incident] cut off my tongue [when it came to promoting the region],” he says, referring to how impossible it was to convince anyone else to come. No one has signed up for Nanga Parbat so far this year.

This year, the goal to scale the mountain may be tied in with the desire to repeat a 2012 feat in which over 20 people reached the summit in a single day. Three expeditions are hoping to take part: a joint Italian and Pakistani group, a group of Czech and Greek climbers and an international group comprising British polar explorer Adrian Hayes and three Nepali women. However, it is unlikely they will make it on July 31, the day Lino Lacedelli and Achille Compagnoni stepped on the summit of K2 60 years ago. Given the 60-year anniversary and the presence of two other expeditions attempting to summit at the same time, there would be more support to get through some of the more dangerous areas. Over the years, nearly 100 climbers have perished while trying to summit K-2.

For Hayes, the idea to reach the summit is much more personal than any anniversary commemoration. “For me its unfinished business,” he says.

Hayes, like some others, has returned to Pakistan after having already visited last year. “Nanga Parbat happened when we arrived,” he recalls. He soldiered on despite what happened in Diamer, and headed to K2, but severe weather forced him to return from Camp-II. Two New Zealanders, Marty Schmidt and his son Denali, had pushed on to Camp-III but an avalanche wiped out all trace of them. Hayes was the one who had posted the information online and announced their disappearance to the world. “We would be lying if there weren’t any thoughts [about Schmidt and his son] when we get to Camp-III,” he says. Achille Compagnoni on K2 summit on the first ascent on July 31, 1954. PHOTO: WIKIMEDIA

The list of the dead grows. Last Tuesday, the director of a local adventure company Nature Explorers died on a trek to the K2 base camp near Gondogoro-La. Twenty-six year old Waqas Siddique, a graduate of Air University where he had become the president of their adventure club, was leading a group to the K2 base camp from Skardu.

Even as the news of this death spread, the remaining climbers remain single-minded about their goal. But yes, the journey to the top is also full of the memory of those who didn’t make it.

(2014 summer season is still under process)