No stone unturned: Security tightened across the country

No stone unturned: Security tightened across the country

A ‘red alert’ was declar­ed and Sectio­n 144 impose­d in Sindh.
By Our Correspondents / Hafeez Tunio
Published: June 17, 2014
Tweet Email 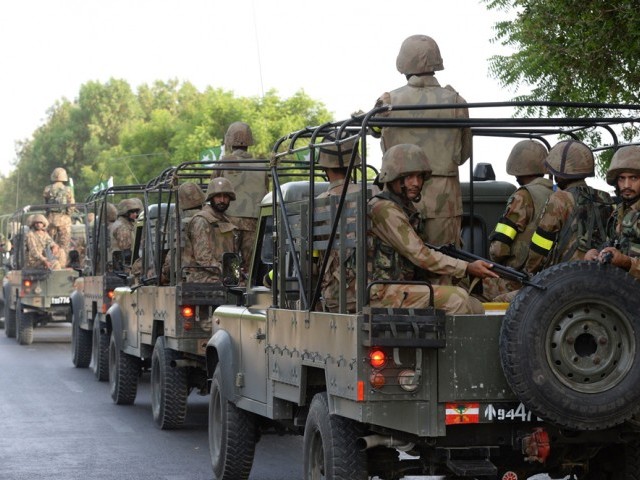 FAISALABAD / QUETTA / LAHORE / PESHAWAR / KARACHI: Authorities in all major towns and cities have stepped up security to thwart possible reprisals to the North Waziristan operation.

Deployment of security officials at key government offices and sensitive installations, as well as public spaces such as railway stations, bus stands, cinemas, markets, places of worship, airports and parks has been boosted.

After the meeting, Information Minister Sharjeel Inam Memon said the chief minister and governor will take religious and political parties into confidence to enforce the ban on public gatherings. “Terrorists can target any political or religious activity, therefore we want to make precautionary measures,” he added.

Memon said police and Rangers will be deployed at major public installations and sensitive places, while the army will work as a back-up force. “Army personnel will be present in all districts. In case of emergency, they will act as quick response force,” he added.

According to an ISPR statement, army troops have been alerted and forward placed to assist law enforcement agencies. “The army will remain at designated places and will be employed in case of emergency whenever asked by the civil administration,” the ISPR said.

“The army will respond as the third-line force while the primary responsibility will be with the Rangers and police,” a military spokesperson told The Express Tribune as trucks and armoured vehicles took positions in neighbourhoods and sensitive locations across Karachi on Monday.

Additional security officials were placed at police stations and headquarters, barracks, the CM and Governor House, Sindh Secretariat and Assembly, hotels and hospitals.

Parts of Karachi including Orangi, SITE, Baldia, Manghopir, Landhi and Sohrab Goth have been declared highly sensitive as these areas are considered militant strongholds. “Even before the ongoing military operation, militants made Karachi the prime target,” Karachi police chief Ghulam Qadir Thebo said. “Now we suspect that the militants will intensify their activities here.”

Khyber-Pakhtunkhwa IGP Nasir Khan Durrani directed that deployments be enhanced in districts bordering the tribal areas and comprehensive checks carried out in all IDP camps, as well as search operations focusing on hostels, hotels and inns.

A senior police official told The Express Tribune that the DIG Operations Lahore attended a meeting chaired by the provincial chief minister, also attended by the Lahore Corps Commander, for a briefing on the security situation in the city. The official, who wished to remain anonymous, said army officials will also be deployed around the city in plainclothes. The deployment of police personnel in the city has been doubled, the official added.

The Punjab government also asked the City District Government Lahore to identify spaces that allow the armed forces to quickly respond to any emergencies. DCO Lahore Captain (retd) Usman Ahmad has ordered Rescue 1122, Fire Brigade, Civil Defense and officers of District Administration to be prepared to deal with any untoward incident.

In Faisalabad, security was also boosted at the Central Jail, where senior Taliban leaders are incarcerated. District Coordination Officer (DCO) Noorul Amin Mengal issued a formal request to the army headquarters to dispatch two army companies at sensitive points in the city. Additionally, Rangers and army jawans will be available at an emergency centre.

Officials in Quetta were also put on high alert and sources in the Commissioner Quetta Division office said police and Frontier Corps teams will patrol the city. Additionally, LEAs launched a crackdown in parts of the city, detaining several armed suspects.

Meanwhile, Gilgit-Baltistan (G-B) Chief Minister Mehdi Shah that extraordinary security measures have been taken to check the migration of terrorists from North Waziristan into G-B. While the terrorists are on the run, we have secured the Karakoram Highway and other routes linking G-B to the rest of the country,” Shah said.