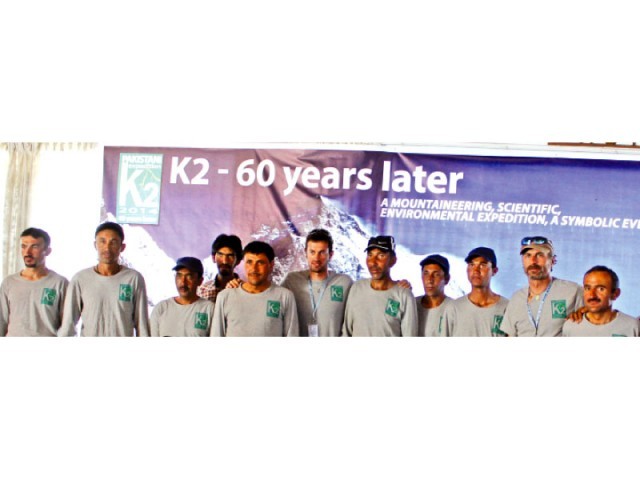 The expedition team poses for a group photo at the event. PHOTO: EXPRESS

Eight mountaineers from Gilgit-Batistan (G-B) received an overwhelming reception from local authorities, tourist organisations and foreign mountaineers at the send off ceremony of the first fully-Pakistani expedition to summit K2, the second-highest peak in the world.

The ceremony was arranged by the Central Karakoram National Park (CKNP) and the Gilgit-Baltistan Tourism Department with the support of the Ev-K2-CNR at a local hotel on Friday evening.

Sarbaaz said, “Our mountains are the best for adventure tourism and mountaineering and the region is very peaceful and hospitable for the domestic and foreign guests.

Gallo mentioned that the team was competent to scale K2 if something ‘unusual’ did not happen. “All the mountaineers are very enthusiastic and well aware of the harsh behaviour of mountains,” Gallo said adding that but they have the requisite skills and techniques to face untoward situations.

Two Italian mountaineers, Michele Cucchi and Simone Origone would be available for technical support and assistance to the Pakistan expedition.

The CKNP director said that tourism opportunities were being explored with the support of the Italian government. “This expedition would mainstream the CKNP and Pakistan on national and international levels.”

Bato President Iqbal was happy to see porters becoming mountaineers. “I trained them as porters to climb initially. Now the Italian mountaineering experts have equipped them with skills and techniques to climb the harshest mountain — K2. I believe in their skills and they would succeed.”

Munir Ahmed said that the first K2 summit by an Italian expedition in 1954 was made possible by the expedition’s Pakistani members including Amir Mahdi. “Today, history is repeating itself, as for the first time, a Pakistani official team is attempting to summit the most dangerous mountain.”