The clashe­s were the first since a new Indian govern­ment came to power, headed by Prime Minist­er Narend­ra Modi.
By AFP
Published: June 13, 2014
Tweet Email 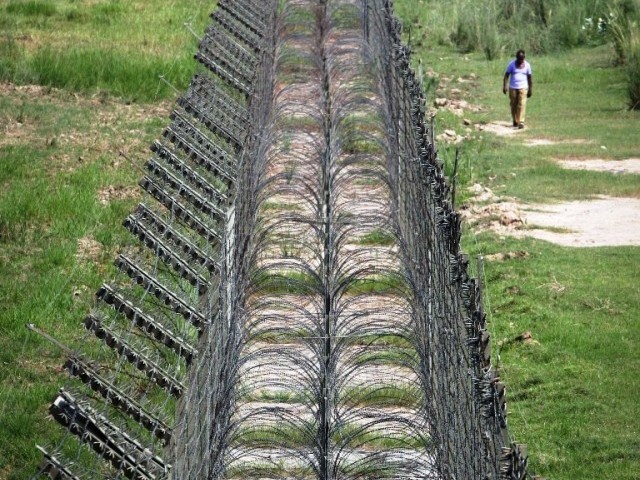 Violation takes place in Nakyal sector of Kotli, a child is among the injured. PHOTO: REUTERS/FILE

MUZZAFARABAD: Pakistan accused Indian troops on Friday of wounding two civilians, including a seven-year-old boy, in separate incidents of “unprovoked firing” from across the de facto border in the disputed Kashmir region.

India’s army in turn blamed Pakistan for firing on its troops, alleging its arch-rival and neighbour had breached a ceasefire.

The clashes were the first in the Himalayan region since a new right-wing Indian government came to power last month headed by Prime Minister Narendra Modi.

They follow a spate of cross-border skirmishes last year between the nuclear-armed powers, which have fought three wars since independence from Britain in 1947.

On the Pakistani side, local police official Chaudhry Ameen told AFP “a seven-year-old boy was injured due to unprovoked shelling by Indian troops in Nakyal sector,” referring to a border district located 125 kilometres (78 miles) from Muzaffarabad city.

But Indian defence spokesman Manish Mehta said the Pakistani army was responsible for firing on Indian soldiers “using automatic weapons and mortars” in the district of Rajouri, which borders the Nakyal area in Pakistan.

Mehta said the Indian army responded to the firing, which continued for about half an hour, adding there were no casualties or damage reported on the Indian side.

Separately, another Pakistani civilian was wounded after Indian troops allegedly opened fire in Battal, a district 65 kilometres north of the first clash, according to local government official Malik Ayub.

Indian defence officials told AFP they had no knowledge of a second incident.

Friday’s events, described as a “ceasefire violation” by India, come a day before India’s new Defence Minister Arun Jaitley is scheduled to visit the disputed state of Jammu and Kashmir for a security review.

The last war between the two countries was in 1999 when Modi’s Bharatiya Janata Party (BJP) was last in charge of the national government and Pakistan’s current Prime Minister Nawaz Sharif was in office during a previous stint in power.

But Modi has been reaching out to Pakistan since his landslide victory last month, inviting Sharif to his inauguration in a surprise move seen as a significant olive branch.

The two leaders held talks in New Delhi after the inauguration, with both saying the discussions were positive.

In a letter to Sharif released Friday by the Pakistani premier’s office, Modi expressed his desire to work closely with him in “an atmosphere free from confrontation and violence”.

Muslim-majority Kashmir is divided between India and Pakistan by a de facto border known as the Line of Control, or LoC, since the two countries gained independence.

The rivals both claim the territory in full and agreed on a border ceasefire in 2003, which has largely held, with occasional violations reported from both sides.

On May 11, Indian troops had resorted to ‘unprovoked firing’ after midnight at the Bhattal sector of the LoC. Pakistan Army had lodged a protest with Indian authorities after the incident.

On April 25, after almost three months of calm, the two sides had accused each other of breaching the ceasefire agreement following mortar shelling and firing in the Poonch Sector on the LoC.

Three days later, the two sides had exchanged fire again. Although, no loss of life was reported from either side during these clashes, the situation indicates the fragile nature of the truce.