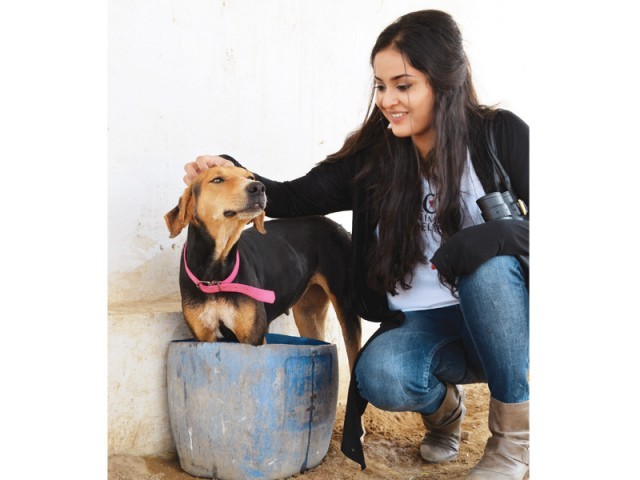 Growing up in a house full of pets gave Ayesha Chundrigar an informal, intuitive education in empathy and respect for animals at a young age. She was only nine years old when she began volunteering at an orphanage during her summer holidays, and by the age of 15 she was teaching at various non-profit schools in katchi abadis around Islamabad, where she was living at the time. She was also helping at refugee camps in the city in the aftermath of the 2005 earthquake in the northern areas of Pakistan, but her true altruism shone through when she launched her NGO, the Ayesha Chundrigar Foundation (ACF), in Karachi, which among other things, aims at giving a voice to the voiceless – animals.

Apart from the Pakistan Animal Welfare Society (PAWS), ACF is now the second non-profit organisation which aims to rescue abandoned, abused or injured stray animals. Chundrigar who took up the challenge of managing and maintaining Edhi Foundation’s animal shelter in Karachi, says that the place was in an abysmal state when she first visited it. “There were animal carcasses and dead puppies and donkeys lying in pools of blood. I still have nightmares about it,” she says. “I found the number of a vet listed on a board close to the shelter and gave him a call saying he had to help me and that was it.” All animals coexist in perfect harmony at the shelter.

Chundrigar started with four dogs and some savings. The shelter now houses over 100 animals, including donkeys, dogs, cats, eagles and pigeons. Although she has used up all her savings, she finds her job truly worthwhile. ACF has rescued over 600 animals in Karachi and has long-term plans of opening its own animal sanctuary instead of only managing Edhi’s animal shelter. “We have been given a piece of land for 10 years and we are ready to begin construction,” informs Chundrigar, adding that the new shelter will be able to house over 300 animals, with designated sections for donkeys, cats, dogs and other rescued animals.

Although the current shelter lacks electricity and water supplies, the Edhi Foundation is making do. They are preparing to install a water tank and solar panels. The animals are fed fresh food every morning and there is a general atmosphere of hope and recovery. “Our cats and puppies eat together and play together,” says Chundrigar. “I can stay and look at these sights forever.”

But this is not always the case. “Dogs have come in a paralysed and crippled [state] or with horrific wounds, but I’m lucky enough to see miracles every day. These animals [eventually] become strong, loving creatures that shower you with unconditional love.” Dr Farid nurses the fore limbs of a donkey at one of the camps.

At the present, ACF’s core team of seven members, including Chundrigar, volunteer. The only ones on a payroll are their three veterinarians: Dr Khalid Memon, ACF’s senior vet who is a professor at the Baqai Veterinary College in Karachi, Ghulam Farid, a junior vet who is a final year veterinary student at Baqai, and Salman Wali, a manager and trainee vet at Baqai.  Together they embrace the animals that society discards.

With the help of Edhi Foundation’s service, ACF conducts most of its rescue missions around the city in an ambulance. Public transport, however, is also used by vets when the ambulance is unavailable. Once the injured animal has been rescued, its wounds are treated and then begins the long rehabilitation process.

Ayesha Chundrigar with her team at a recent donkey camp.

Although most rescue operations end on a happy note, some have tragic endings. When Chundrigar first saw the image of a female dog, with a disfigured face lying on the ground almost lifeless, on Facebook, she didn’t just comment on the extreme sorrow she felt, instead she took a hands-on approach. “Five of her puppies were snuggled near her tummy [in the picture] and I sent my team to rescue them [from Chundrigar Road],” she says. “The wounds … were definitely a few days old, her eye sockets were empty and she was severely dehydrated and malnourished, but by some miracle she stayed alive to feed her babies. We bandaged her up and started her treatment,” she says, adding that the puppies were fed formula milk although their mother was still determined to feed them herself. Although after a day the dog had gained enough strength to stand up on its own and take a few steps, she eventually succumbed to her injuries. “Unfortunately her wounds were too deep and after I petted her for hours and gently explained to her that I’d take care of her puppies, she let go.”

But dampened spirits don’t last at ACF for long as the team finds solace in the animals they have successfully rescued and rehabilitated. Bravo, a dog so thin and malnourished that he could barely lift his head, was nursed to health by Farid who was determined to see him stand on his feet. After several blood tests, X-rays and consistent monitoring, Bravo has not only regained its health but is currently ACF’s guard dog. “[Bravo is the] biggest, strongest and healthiest dogs at the shelter,” Chundrigar says proudly. “He gives me the warmest, most welcoming hugs every time I see him.”

ACF also holds regular donkey camps. “The way donkeys are treated in this country kills me and I wanted to somehow change that,” says Chundrigar. “The donkey camps started with literally just me and my senior vet standing on the roadside in [areas where donkey-carts are readily used], asking people to let us medically treat their donkeys for free.” While initially Chundrigar’s team was met with suspicion, with some cart owners believing that they were here to harm their sole source of income, they soon warmed up to them once they were convinced that the team was only there to help. Over 50 donkeys are fed and treated free of charge twice a month, in various parts of Karachi, including Sohrab Goth, Korangi and Nipa Chowrangi. ACF also conducted a ‘hydration drive’ last year when biscuits and chilled water bottles were distributed to people around the city. Dr Farid gives one of the dogs eye treatment at the Edhi Foundation animal shelter along the highway.

Like PAWS, ACF relies heavily on social media to raise awareness about animal cruelty in Pakistan. “People see updates on our animal rescue activities and donkey camps and want to help out,” says Chundrigar. And it was through Facebook that Chundrigar teamed up with Zain Mustafa, an architect and die-hard animal lover, who is now a part of ACF’s core team. Many have even shown interest in adopting ACF’s rescued animals. “The encouraging part is that people are positive towards something being done for animals in this country,” she says. And while on the topic of showing compassion towards animals in the country, Mustafa adds, “It can be done by introducing the value of animals into our mainstream education system and curriculum at a very early age…  By getting children to physically interact with a variety of animals and bridge the widening gap between ‘us’ and ‘them’.”

ACF’s second project is also currently in the pipeline. It will aim to provide a therapeutic centre for healing that will focus on conducting individual counseling, art therapy and support groups. “We will be working with sexually and physically abused women, children and transgenders. [The project] will also include education for donkey-cart owners that, I believe, will gradually help change their behaviour towards the animals,” says Chundrigar, who is training to become a certified counselor.

But with limited funding, the ACF can only do so much. Although people have been donating cash and tangibles such as food via the information provided to them on social media, the funds are trickling in slowly. “What we get is enough to manage our current animals’ food and medical treatment,” says Chundrigar, adding that the monthly cost for food and supplies at the shelter is well over Rs100,000 and keeps increasing as the organisation rescues more animals each day. “We still need help starting our new shelter, acquiring ambulances and starting an inner-city emergency unit.”

Even though Chundrigar is positive about the path ahead for ACF, she admits that for Pakistan, animal welfare and charity is something quite “out of the ordinary,” with people often mocking her work. “They said I was crazy to think I could do something for animals because the situation is too far gone. Also, it’s an uphill battle explaining to people why animals deserve love and a chance at having a better life.”

For food donations and volunteering queries, please write to:

Sonya Rehman is a writer/journalist based in Lahore. She tweets @sonyarehman