Garhi Shahu attacks: Four years on, trial at a standstill

Garhi Shahu attacks: Four years on, trial at a standstill 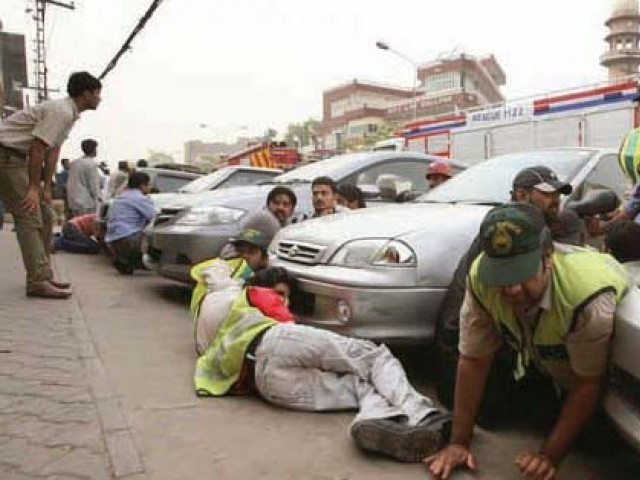 Local residents and rescue workers take cover during an attack on an Ahmadi worship centre in Lahore’s Garhi Shahu neighborhood on May 28, 2010. PHOTO: FILE

Four years after deadly twin attacks on two of their worship places in Lahore, the families of 94 members of the Ahmadiyya community await justice for the victims.

On May 28, 2010, worship places in Model Town and Garhi Shahu were attacked by suicide bombers who first targeted those present with bullets and hand grenades.

Nearly 150 others, including children, were injured in the attacks. Two accused were handed over by the community to the police and a trial has been under way since at the Anti-Terrorism Courts.

A member of the community, requesting anonymity, told The Express Tribune that witnesses are afraid to record their statements in court, fearing that they too will be targeted if they are identified.

Despite multiple warrants issued to the witnesses, they have decided not to join the court proceedings. He added that the police have yet to arrest any others involved in the attacks, even as FIRs have been lodged by the community against suspects.

“Given the culture of impunity here, no one seems to be bothered about delivering justice to us and every day members of our community are targeted,” said the spokesperson for the Ahmadiyya community, Saleemuddin.

“The two attackers against whom a charge-sheet was prepared in the Lahore attacks were tackled by worshippers themselves in Model Town. The police have neither identified any other attacker nor has it taken the matter seriously,” he added. In the latest attack on the community, 50-year-old cardiac surgeon Dr Ali Mehdi Qamar was gunned down in Rabwah on Monday in front of his wife and son.