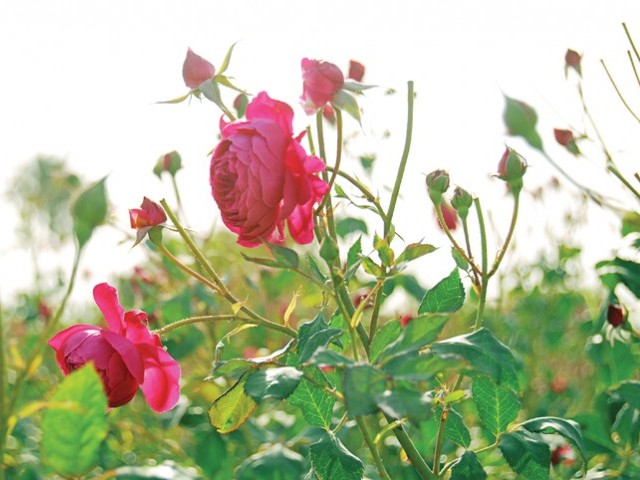 At Teen Hatti, Karachi, men handle flowers with rough hands. Trucks piled high with tokris carrying a variety of flora from Lahore, Hyderabad and Memon Goth in Gadap Town are unloaded every morning. They are then tossed into plastic bags by the fistful or tied neatly into bunches and placed along the pavement, from where they are whisked away by retailers coming from the city. A Jasmine sambac (motia) garland being made at a flower shop in Gizri.  PHOTO: ARIF SOOMRO

“These days roses sell for Rs40 to Rs50 per dozen, marigolds for Rs100, tuberoses for Rs300 to Rs350 and Swiss Sultan for Rs80 to Rs100 a bunch,” says Muslim Baloch, a retailer at the market. The seeds for red roses, however, are available for Rs14.5 per seed. Seeds for English roses, available in five different colours, are sold in packets worth Rs1,600-1,700, whereas the seeds for marigold, brought from Punjab, cost Rs12,500 for a 50-gramme packet. Once the seeds are sown, they require consistent watering and care for two months until they start to bloom. Farmers usually prefer the ‘desi gulab’ over the English rose, which requires clean water, which adds to their cost. It takes a seed nearly 10 months to blossom into a full-grown healthy plant and can have a life of about 12 to 18 years. Production is at its peak from February to April, when the weather is relatively moderate, with each acre producing nearly 50-60 kilogrammes of roses. The yield remains considerably lower during summer and winter.

While vendors profit from a boost in sales on various special occasions during the year such as Valentine’s Day, Eid and Eid Miladun Nabi, farmers reap no such benefits. Therefore, some farmers like Abdul Hakim Baloch have started selling directly to event management companies in order to stay in business.

A florist sorting out supplies at a shop in Teen Hatti.    PHOTO: ARIF SOOMRO

For some roses, the journey that begins at Teen Hatti culminates in unusual places. Those that do not find buyers in the first few days often end up with florists near graveyards, while shopkeepers claim that some wilted leftovers are also purchased by perfume makers. Perfume makers in Botal Gali, however, refute the claim stating that strong scents can only be extracted by drying fresh flowers. Arif Soomro is a page-maker and a freelance photographer at The Express Tribune.