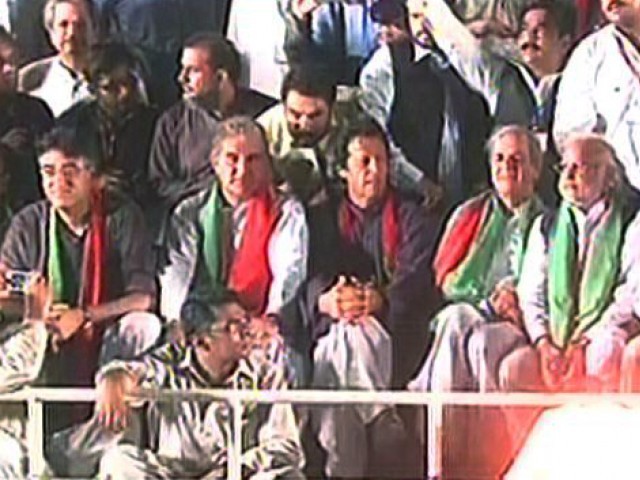 FAISALABAD: Addressing a rally in Faisalabad to protest alleged rigging in the May 2013 general election, PTI Chairman Imran Khan said he would continue his protest until recounting took place in the four constituencies where he believed rigging had taken place.

Khan said that all those who were involved in the rigging process should be investigated and charged under Article 6 of the Constitution if found guilty.

Further, Imran said, PTI is the first ever party to hold intra-party election.

“When PTI will hold its second intra-party election, any one of you can become the PTI Chairman,” said Imran Khan.

Talking on tax reforms, Imran said that said that revenue can not be generated until corruption is rooted out. We are not in favour of increasing the tax rate, rather we believe in widening the tax net.

He claimed that tax collection has doubled in Khyber-Pakhtunkhwa since PTI came to power last year. He also announced that his next rally would be held in Sialkot on June 7.

Earlier, a ‘free for all’ government-organised concert featuring Naseebo Laal and Hans Raj Hans in Faisalabad became a bone of contention between the government and PTI.

PTI claimed that it was but one of several ‘tactics’ that had been employed by the district administration to woo crowds away from their jalsa.

With the PTI having announced its protest against rigging in elections two weeks ago, supporters of the party insisted that the government was all out to hamper the turn out at the Dhobi Ghat – the venue of the protest.

However, upon his arrival at the protest venue, the PTI Chief Imran Khan said the government’s tactics would not affect the PTI protest.

“The government thinks people are fools, they think people are not serious and they can distract them by arranging concerts, but what the government does not know is that their time is up,” said Imran Khan.

In the days leading up to the protest, Faisalabad saw PTI banners being put up everywhere. But the city woke up on Sunday to find it decorated with hundreds of posters and pana-flex billboards of the Textile Park — a recently announced initiative of the Chief Minister Punjab Shahbaz Sharif.

Sheikh, the former vice president of the PTI Youth Wing, said that till early Sunday morning banners and poster of the PTI were being taken down by the district administration officers.

“As late as 4am on Sunday our supporters were on the streets to put back all our posters and banners which were being taken down.”

Officials of PTI claim that their banners were being continuously taken down by government officials from various neighbourhoods including Katcheri Bazaar, Allied Morr, Chiniot Bazaar and areas surrounding the motorway.

But what distressed the local party leadership more on Sunday was the public concert also being held on Sunday at the Bohranwala Ground.

Calling it the ‘Naseebo Laal democracy’, the concert was viewed by PTI leaders as another attempt to distract crowds from the jalsa.

“They [the government] talks of democracy and democratic attitudes. This is their tolerance to democratic processes. This is nothing but ‘Naseebo Lal democracy’ sponsored by the government,” said central president of the Insaf Students Federation of the PTI Farrukh Habib while speaking to The Express Tribune.

Government vehicles, he claimed, were being used to advertise the concert throughout the weekend. Colourful banners advertising a free for all ‘musical night and laser light show’ were put up across the city next to PTI banners.

Although a supporter of PTI, Khan said while the concert may attract crowds it could not prevent staunch supporters from going to the jalsa.

“You simply cannot trade your political views and cause for Naseebo Lal’s concert,” said Khan.

PSO to DCO Faisalabad Riaz Anjum has maintained that the government has worked with the PTI leadership regarding security arrangements. He denied that any hurdles were being created by the government.

While the PTI officials claim to expect a crowd of over 50, 000 at the Dhobi Ghat jalsa on Sunday, provincial law minister Rana Sanaullah criticised the PTI leadership for holding such a jalsa.

Addressing a press conference on Sunday, he said the government was cooperating with the PTI in regard to arrangements for the protest but he also questioned the motive of holding such public protests.

The protest was to start at 5pm but hundreds of cars, vans and buses were witnessed entering the city from Lahore via motorway as late as 4pm.

The DCO office had announced that more than 3, 000 police officials had been deputed for security.

Nadia Jamil and Sania Saeed team up after 15 years