Actor made a comeba­ck with Englis­h Vingli­sh, which is all set to be screen­ed in Japan.
By IANS
Published: May 24, 2014
Tweet Email 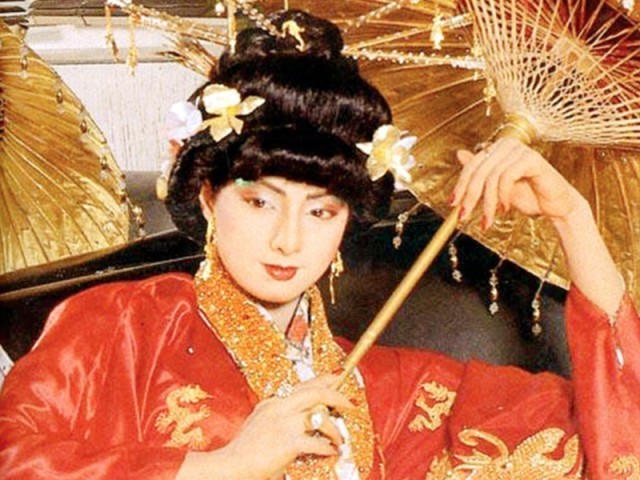 Sridevi looked so Japanese in a section of Roop Ki Rani Choron Ka Raja that the images are now being used to promote English Vinglish. PHOTO: FILE

A section of the 1993 film Roop Ki Rani Choron Ka Raja where Sridevi donned the look of a Japanese girl is now being used to promote the actor’s comeback film English Vinglish (2012) for its release in Japan on Tuesday. The film, which was a hit, will be dubbed in Japanese.

Sridevi’s husband, producer Boney Kapoor has agreed to let English Vinglish producers Eros International use footage of Sridevi from his mammoth production Roop Ki Rani Choron Ka Raja. The film sees Sridevi dressed as a traditional Japanese woman in a kimono and with make-up that made her look strikingly Japanese.

Confirming this, Boney said, “Yes, there is a section in Roop Ki Rani Choron Ka Raja where Sri was dressed up as a Japanese girl. She looks so Japanese that I’ve offered to let the producers use those images of Sri to promote the Japanese release of English Vinglish.” Sridevi is ecstatic about the impact that English Vinglish has made globally. “After being widely released in Germany, Korea, Hong Kong, Taiwan and now Japan, there surely is reason to feel proud and elated. It’s very heartening to see the film reach out to different countries and different groups of people,” she said.

English Vinglish director Gauri Shinde added, “I feel super awesome. I was there for the promotions in Tokyo last year and was completely overwhelmed. Seeing the response, the distributors decided to increase the number of screens for release.”