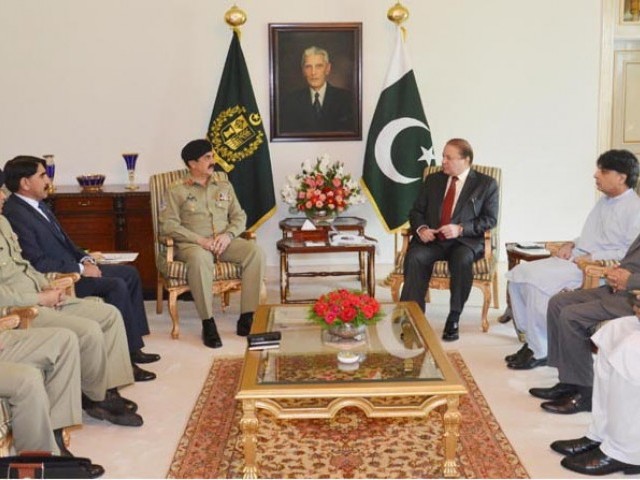 Pakistan has extended its full support to Afghan authorities for the second phase of presidential polls but urged them to take urgent steps against repeated cross-border firing incidents by their security forces.

The issue was one of the key agenda items during a high-level meeting chaired by Prime Minister Nawaz Sharif on Tuesday. The meeting was attended by top civil and military leadership, including Chief of the Army Staff General Raheel Sharif and Interior Minister Chaudhry Nisar Ali Khan.

According to an official statement issued by the Prime Minister House, the army chief briefed the PM on his recent visit to Kabul and his discussions on border coordination and security for the second phase of the Afghan presidential elections.

An official, privy to the development, said the meeting discussed Afghanistan in the post-election and post-US drawdown scenario. The army chief briefed the meeting about his visit wherein he had asked the Afghan authorities to take steps against cross-border firing incidents, he added.

He said Gen Raheel took up the issue during his talks with his Afghan counterpart Sher Muhammad Karimi and International Security Assistance Force (Isaf) Commander General Joseph Dunford in Kabul on Monday.

Officials said the army chief told the meeting that he shared his concerns with Afghan authorities regarding the alleged sanctuaries of Tehreek-e-Taliban Pakistan (TTP) in Afghanistan and said that Islamabad suspected that the TTP chief Mullah Fazlullah was being given refuge by Afghan security agencies.

The issue was discussed in the backdrop of ongoing peace talks with the TTP which had entered the second phase when the infighting within the Taliban ranks and government’s cautious approach towards their demand for release of non-combatants put the process on the backburner.

Though Tuesday’s meeting discussed the security situation in regional and national context, the official statement did not have a mention of talks with the Taliban.

On the other hand, officials did not say as to whether the issue of talks with the Taliban was taken up or not irrespective of the fact that the interior minister had recently announced that the government was going to resurrect the talk’s process.

The meeting, according to the statement, discussed national and regional security situation. Additionally, the law and order situation in Balochistan and Karachi was also reviewed.

The interior minister briefed the premier on the law and order situation in Karachi in particular and it was decided the targeted operations against miscreants would continue in the metropolis.

The axe falls: Govt steps in to rescue Geo