A shaky Shershah scrap market picks up the pieces

A shaky Shershah scrap market picks up the pieces

Trader­s have opened up their shops after securi­ty assura­nces from the CCPO Karach­i and Rehman Malik.
By Ahmer Rehman
Published: November 2, 2010
Tweet Email 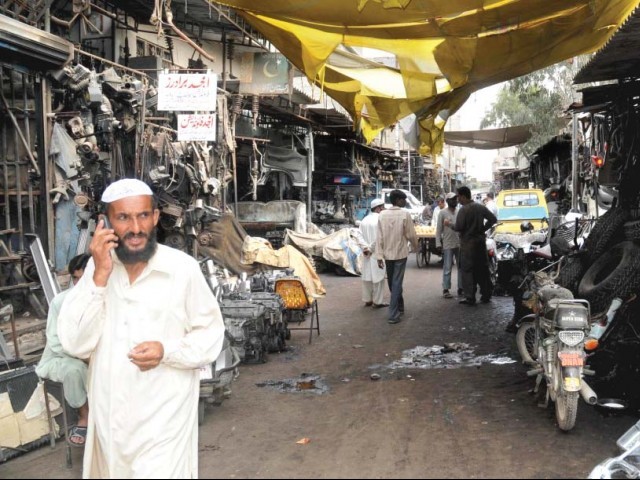 Traders have opened up their shops after security assurances from both the CCPO Karachi and Interior Minister Rehman Malik. PHOTO: RASHID AJMERI/EXPRESS

A Quran khwani and collective prayer were organised in memory of the victims, after which shopkeepers unfettered their shutters, rolled them back up and went back to work. A group of armed men stormed into the market and sprayed stunned shopkeepers with bullets on October 19, killing 12 of them, five of whom were from one family. On Monday, their families watched the market attempt to return to some semblance of normalcy but their pain is far from over.

Shop No 413 belongs to Abdur Raheem. As he swept up the dust that had accumulated over the past two weeks, he wondered how he would continue work. The men who really ran his shop were his two nephews, Muhammad Asif and Muhammad Atif, who were killed.

“We had to open the shops today but we’re so worried,” said Raheem. “For the past 15 days we have not bought groceries because money has been so tight.”

Two other victims were Abdus Salam’s sons. Just the act of reopening the shop overwhelmed him with grief as it was something he would always do flanked by his two sons. “Abb to mera Allah hee hafiz hai [Only God can protect me now],” he said sadly. “I don’t know anything about the shop, my sons had always taken care of the business.”

Chief of police Fayyaz Leghari assured that a security plan has been devised for the market. About 250 policemen will be on patrol and others will be stationed with 15 mobile units and 10 motorcycles. “The home secretary also stressed that Rangers will be deployed,” said Leghari.

But the shopkeepers are sceptical – even though 15 check posts have been set up in the vicinity the traders don’t feel safe. “We should always be provided with this kind of security,” said one of them.

The Shershah ‘kabari’ or scrap market is arguably the biggest spare parts market in the country. It is located at the junction of Lyari and Shershah right at the corner of a road that touches Shershah bridge.

The attack that claimed the lives of 12 men is believed to have taken place after failed ‘negotiations’ between an extortion group and the Shershah market association. A gang from neighbouring Lyari and the market association’s president locked horns over new extortion rates.

The FIR registered against the attack nominates Lyari gang members, including Baba Ladla, who the police have claimed to have arrested. According to police, at least 10 other suspects have also been held.

Earlier, Interior Minister Rehman Malik announced compensation for the families and assured that their children will be given jobs in the FIA, NADRA and the police department.

“The government is with you. No one can dare to force you to keep your business shut,” Malik told the traders.

Dubai sets out to help people in Thar