Game of Throne­s season four emerge­s as a game-change­r for fans.
By Sibtain Naqvi
Published: May 18, 2014
Tweet Email 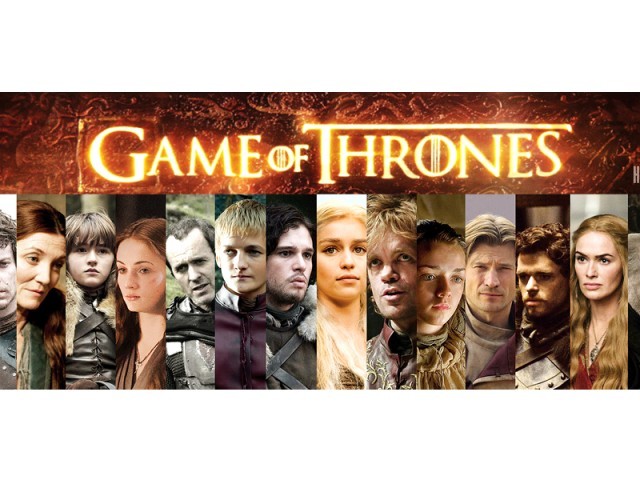 Game of Thrones season four emerges as a game-changer for fans.

“I will answer injustice with justice,” replies the exiled Daenerys Targaryen at the suggestion of her advisor to spare the lives of the slave masters. She then proceeds to crucify them in the same way they had crucified their slaves.

This is just one of the many powerful scenes in the latest season of HBO’s Game of Thrones. The show has left its ever-growing acolytes, who reached a 6.5 million mark this season, salivating for more.

Based on George Raymond Richard Martin’s books, collectively called Songs of Fire and Ice, Game of Thrones revolves around magic, history and realpolitik. It shows the leading families of the seven kingdoms of Westeros torn by civil war for the Iron Throne. A historical approximation is the War of Roses which was fought between the houses of Lancaster and York. This current season is adapted primarily from the second half of the novel A Storm of Swords, along with elements of A Feast for Crows and A Dance with Dragons.

Previous seasons of Game of Thrones have usually followed a pattern. Starting with a recap of the plot lines, building up to a crescendo with the death of a major character, or characters, and then tapering off with a muted coda for the next season. Ever since Ned Stark lost his head, death has been the only constant in the Game of Thrones, even one wrong word leading to a severed limb or worse. Watching Hound confront ruffians in the King’s service gives one an impending sense of doom and you can feel the palpable tension in the room. This time around the ‘royal’ death happens in the second episode which hints at more violence in the coming few weeks. With HBO’s tagline ‘All men must die’, it should not be surprising if many more men and women are mowed down in a tried and tested bid for high ratings.

Then again Game of Thrones is an unconventional TV show, even in the genre of swords and fantasy productions. The intricate plot lines and strong characters keep one riveted to the action and there is enough titillation of the senses to gloss over even the dryer bits. In season four, Daenerys Targanean moves towards reclaiming the Iron Throne in what must be the slowest military march in the history of television, and other characters go through their paces for a season climax. Some parts of the show hold up the plot better than others. Arya and the Hound’s adventure on the road have provided what passes of as comic relief and Tyrion Lannister emerges as the unexpected hero at the very start and continues to hold his own even as new characters are introduced. Plot twists and multiple narratives are not jittery and character development is done carefully, even if it is for a lowly squire.

What makes the current season of Game of Thrones watchable is the seamless switching of scenes between the arid landscapes through which Daenerys plods to the icy realms of the North where John Snow prepares to resist the impending wildling invasion. In between are other storylines which, when combined, are a testament to the makers of the show who were able to convert George Martin’s byzantine storyline into great television.

There are, however, some weak points in this season as well. The much spoken about dragons have yet to live up to their hype and in a show with complex and layered characters and subplots, the portrayal of Daenerys as the good force makes her successes far too predictable. Jamie Lannister, assumed to be the villain by his father seems to be out of place in the current setting. His chief role in the show thus far has been the much condemned rape of his sister Cersie, who in contrast has managed to maintain the malevolent persona throughout the seasons.

The rape scene has sparked more than its share of controversy. In the books, this encounter is consensual but the show’s writers decided to go the other way and have attracted disapproval from all quarters. Several critics have blasted the show for its politically incorrect stance while others have forsaken the show for good. The surprising bit is that worldwide audiences have not shown the same level of displeasure over the graphic images and have been fairly matter-of-fact about these aspects.

And as the show progresses, our focus is diverted to the following: Will Tyrion Lannister walk free? Will Sansa and Arya make it to freedom? Will John Snow prevail? And most importantly, will we see the dragons breathe fire over their mother’s enemies? These and many other questions will keep millions glued to the events of Westeros as we move towards the season finale. As Jamie Lannister said, “The war is not won.” No, not yet.

Sibtain Naqvi is a freelance writer and an art critic. He tweets at @Sibtain_N

Published in The Express Tribune, Sunday Magazine, May 18th, 2014.