Media talk: ‘You can kill a journalist but the story lives on’

Media talk: ‘You can kill a journalist but the story lives on’ 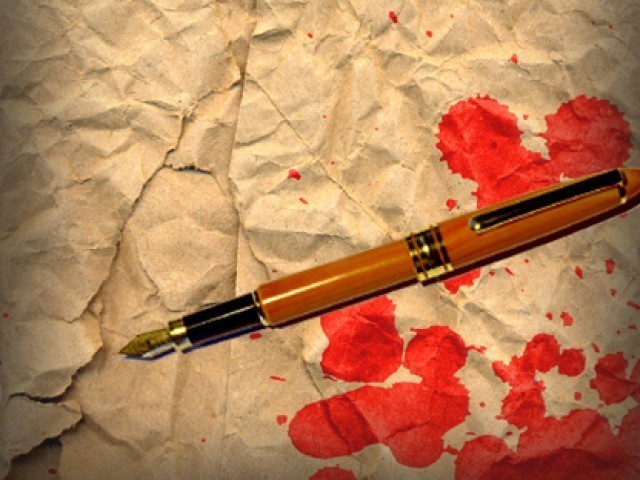 Between Jan 2013 and Apr 2014, 7 journalists and 3 media workers were killed in Pakistan, says report. PHOTO: FILE

No story is worth your life, stressed American broadcast journalists Terry Anzur and Linda Roth.

Anzur is a journalism trainer with nearly 30 years of experience in multimedia journalism, whereas Roth, an executive-producer with Wolf Blitzer, has worked at the Cable News Network as a news producer and international correspondent for more than 25 years.

The two were speaking at The Second Floor cafe during an interactive session on Thursday. The speakers shared their views on journalism in Pakistan and the United States; the attacks on media personnel, the roles of the government, agenda setting, responsibility of regulatory bodies, ratings, money, censorship and the working conditions of journalists in the two countries.

Roth started off by stressing the importance of self-protection and insisted that no story is big enough to risk your life for. She added that it was the journalist’s choice to sign up for a story because in the end it is his life at stake.

“On the other hand, it is important to give out a strong message that it is not alright to kill journalists,” said Anzur, adding that if someone is trying to kill a story, killing the journalist will not fulfil it. “You kill the journalist not the story. Hundreds more will come to finish it.”

Both speakers agreed that once journalists stop fearing for their lives, they will be able to do a much better job. “Safety is a big concern for journalists in Pakistan,” said Roth, adding that Pakistan is one of the deadliest places for journalists. “Many journalists have been attacked and militants are threatening them more and more frequently now. It takes great courage to report here in Pakistan.”

When asked about whether the state is responsible for the safety of journalists, Roth was of the view that, as the ‘fourth estate’, the onus is on journalists to protect themselves.

However, they were aware that the media industry, like all others, is driven by commercial motives. “For journalists, ratings and money are main goal in the US, just like they are in Pakistan,” said Roth. Anzur added that this should not be the case since media licences are issued on the basis of public interest, convenience and necessity. Besides, she added, they have to appear before a regulatory body every four years. “Unfortunately, they have stopped practising that,” she said.