Behind barbed wires and padloc­ks, there is an art school that inspir­es tranqu­ility and creati­vity.
By Maheen Irfan / Photo: Tooba Masood
Published: May 3, 2014
Tweet Email 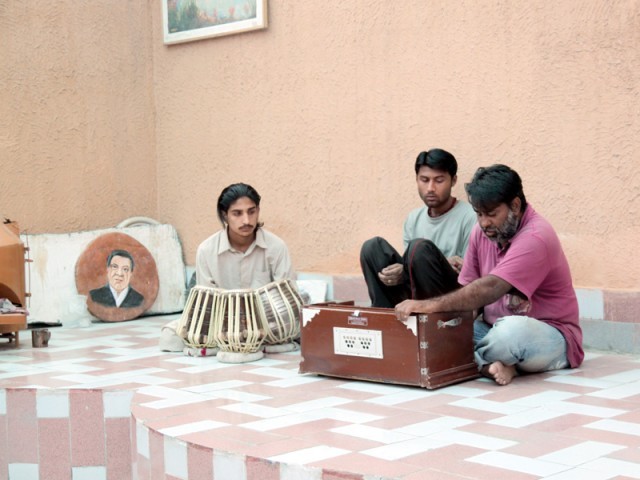 Prisoners at the Central Jail find more productive ways to fill their days. The art class is held every week on Wednesday from 9am to 1pm. PHOTOS: TOOBA MASOOD/EXPRESS

The sound of music wafted through the grounds, as I walked underneath the shade of Neem trees. There, on the walls, were soothing murals of the night sky and of pelicans bathing themselves in the river. I was outside the Central Jail School of Fine Arts and Music.

The school is located in the back of the Central Jail, Karachi. As you pass through the security checks, past the heavy gate chained by a padlock and manned by a constable, past the superintendent’s office, in the outdoor grounds led by the long corridor. Prisoners at the Central Jail find more productive ways to fill their days. The art class is held every week on Wednesday from 9am to 1pm. PHOTOS: TOOBA MASOOD/EXPRESS

I walked inside to find a small group of prisoners playing instruments like the keyboard and harmonium. As I walked into the adjoining room, I found more prisoners scattered around the room. There were students sitting on stools painting canvases placed on easels and others sat cross-legged on the floor, sketching.

There were paintings and sculptures hanging on the walls, placed on the floor next to the walls, and set atop shelves and tables all around the room. Samar Abbas, a senior student of the fine arts programme, stood at the front of the class. In a green polo shirt and khaki pants, as he assisted the others, Abbas resembled a teacher more than a prisoner. He showed me a detailed charcoal sketch of a bird sitting on top of a lantern that he had just finished. Having been part of the programme right from the start — when it first began six years ago — he had sold over a hundred paintings.

I turned to another prisoner who stood chatting with other classmates. Abdul Aziz Bugti had been in the programme since his sentencing four years ago. Convicted for his involvement in a bomb blast and sentenced to four life terms which roughly adds up to 210 years, Bugti was in Central Jail to stay. He wanted to spend the rest of his years widening the gap between his previous life and his current one. Bugti has made friends in the art class.

Clad in an expensive-looking kurta and shalwar, his hair a neat mop of salt and pepper curls, there was a man lounging in the seat behind the teacher’s desk. I asked him, “You’re not making anything?” He responded in an accent that sounded faintly American. “I’m merely a patron of the arts. I come here simply to show support.” The school was launched through the efforts of the then superintendent Nusrat Hussain Mangan, who had hoped that his own love for the arts would also inspire his prisoners to achieve a positive outlook on life. Fine Arts School teacher Sikander Jogi was approached by Mangan and together, they came up with the school that now runs classes six days a week from 9am to 1pm. Senior superintendent of prisons, Kazi Nazir Ahmed said, “Yeh chotta sa poda tha jo ab darakht ban gaya hai [It was a small plant that has now grown into a tree].” Jogi and Ahmed are now trying to get the programme affiliated though the Sindh Technical Board.