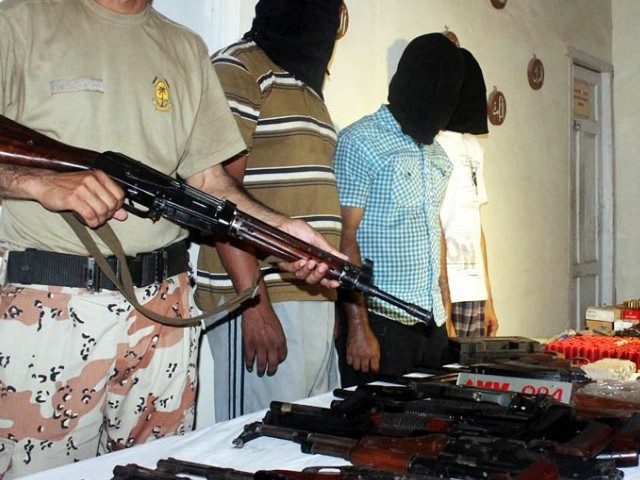 A Ranger displays weapons that they recovered along with the suspects apprehended in security operations. PHOTO: ONLINE

At least 13 suspects, including militants, political workers and a gangster, were apprehended during raids on Friday.

New Karachi Industrial Area police claimed to have arrested three suspects; Ismail Mari, Fayyaz and Fazil. Their arrests were disclosed during a press conference by the West district police chief. Police officials said that the suspects belong to a Balochistan nationalist party. However, they added that the suspects also used to worked for banned outfits, including the Taliban and Lashkar-e-Jhangvi.

The police also claimed that the suspects were involved in terrorist attacks, including the Hyderi blast in September 2012, the intercity bus attack near the Karachi Cantonment Station in December 2012 and the attacks on franchises of different cellular companies in Hyderi. The officials added that the men were also involved in killing six men at a shrine in Gulshan-e-Maymar in January. However, contrary to the police’s claim, sources say that the suspects were arrested by the paramilitary force.

Separately, police claim to have arrested a suspect that was allegedly behind Arshad Pappu murder. Frere police officials claimed the accused, Waseem, allegedly belonged to the Uzair Baloch gang. Police officials added that Waseem was involved in the killings of eight MQM workers.

Similarly, an alleged target killer-cum-extortionist, Ali Akbar, was arrested by the Baloch Colony police, who said that the suspect was involved in more than 40 cases of target killings, kidnappings and extortion. In another raid, the Special Investigation Unit (SIU) police claimed to have arrested a suspect allegedly involved in robbing over Rs5 million from a branch of the Qaumi Bachat Markaz in Bahadurabad.

SP Farooq Awan said that the suspect, Naeem Butt, was arrested after the SIU police raided his hideout in Gulshan-e-Iqbal.

The Eidgah police arrested two workers of the Muttahida Qaumi Movement, Sohail and Amir. Two more suspects allegedly involved in various murder cases were apprehended by the Preedy police. The suspects were identified as Arif alias Kala Bacha and Rashid. Meanwhile, the Rangers conducted a targeted raid in Ramswami. Three suspects affiliated with a political party were arrested along with weapons.