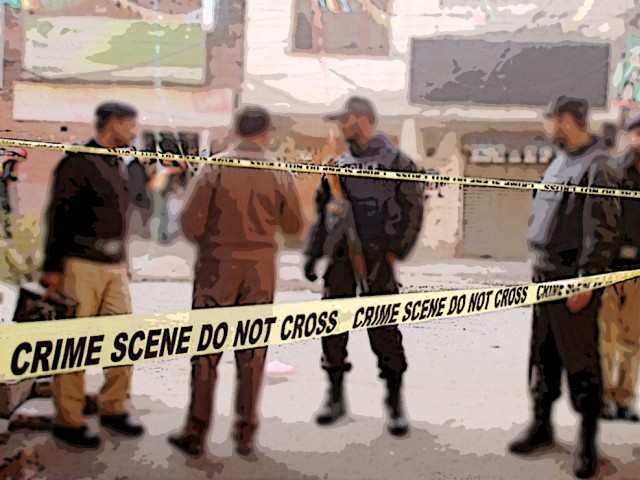 Five police personnel were shot dead during an attempt to rob National Bank of Pakistan in Mastung. PHOTO: FILE

QUETTA: Seven people, including five police personnel, were shot dead and three officers were injured during an attempted  bank robbery in Mastung on Tuesday.

According to Home Secretary Balochistan Asad Gilani two of the robbers were shot at and two others were arrested while one managed to escape. “The robbers have been identified and were local residents of Mastung. Only one robber managed to flee,” Gilani told The Express Tribune.

Police pursued the other three robbers, who had left behind their car near the bank, for almost a kilometer. The robbers took up position at the corner of a street. When the police officers reached the spot, the robbers opened fire at them, killing four personnel on the spot and injuring two others.

According to Mastung police constable Abdul Razzaq, “two robbers were lurking in the street and took position there. They opened fire at police party, killing four personnel on the spot, injuring two others.”

Constable Harz Mohammed was killed when the robbers had fired at the bank while Mumtaz Ahmed was critically wounded.

The injured were transferred to Quetta from Mastung hospital for better treatment.

Another suspect identified as Kamran Haji Kareem managed to flee from the scene.

“Two suspects are in custody and are being questioned,” the Home Secretary said, adding that all the five robbers were residents of Mastung district and police were investigating the incident.

Responding to a question that how such police suffered such a high number of casualties and injuries from few assailants, the Home Secretary said the matter is being investigated by the senior police officers.

“All we can disclose is that the robbers were local residents,” he said, adding that it was not yet clear whether the assailants were connected to any gang or other organisation.

Security around the banks in Quetta has been beefed up following the directives of CCPO Quetta Abdul Razzaq Cheema.

“The security has been improved now at all the banks after holding meeting with regional head of the banks in Quetta,” Cheema told The Express Tribune.

It is pertinent to mention here that millions have been looted by armed men in several bank robberies in Quetta and Hub town during the past couple of weeks.