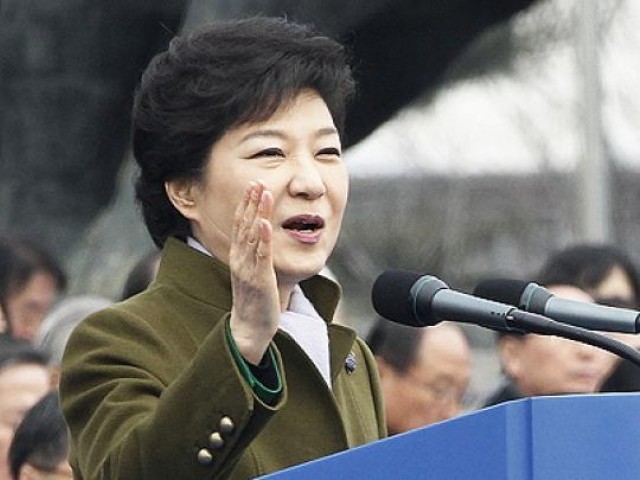 SEOUL: South Korean President Park Geun-Hye apologised for her government’s failure to combat systemic and regulatory “evils” blamed for the loss of about 300 lives in a ferry disaster.

Two days after her prime minister resigned over the tragedy, Park’s comments are another attempt to defuse growing public anger about the April 16 sinking of the 6,825-tonne Sewol.

“I don’t know how to apologise for the failure to prevent this accident, and for the insufficient first response,” Park said in a statement to her cabinet that was broadcast on national television.

“I am sorry to the people and heavy-hearted that many precious lives were lost.”

Park’s government has been widely criticised over perceived corruption and lax safety standards that may have led to the disaster, with claims that the ferry was overloaded and that the passenger list was inaccurate and incomplete.

Echoing words used by Prime Minister Chung Hong-Won when he fell on his sword on April 27, Park blamed systemic and regulatory failings for one of South Korea’s worst ever maritime tragedies.

“I feel so regretful for having been unable to correct such long-running evils and letting an accident like this take place,” she said.

Park accepted Chung’s resignation but ordered him to remain in office until the recovery operation was completed.

Earlier Tuesday, the president had travelled to Ansan, just south of Seoul, where she paid her respects at a memorial for the schoolchildren who died in the disaster.

Of the 476 people on board the Sewol, 325 were students from the same high school in Ansan. Only 75 of them were rescued.

But in a sign of the boiling anger felt by relatives of the missing and the dead, there were shouted demands for her floral tribute to be removed from the shrine, and reports the president had been jostled.

The confirmed death toll from the accident, which took place several hundred kilometres south of Ansan, stood at 193, with 109 people still missing.

Search mission spokesman Koh Myung-Seok said divers had worked their way through passenger cabins on the fourth and fifth levels of the submerged ferry on Tuesday, recovering four more bodies.

But he added that 26 of the ferry’s 64 cabins had yet to be accessed, with divers hampered by strong currents and debris that was blocking access.

As the operation on the sea bed crept forward, the probe into the catastrophe was gathering pace, with the head of the ferry’s operator called to answer investigators’ questions.

Kim Han-Sik, the CEO of Chonghaejin Marine, was summoned to the prosecutors’ office in the port city of Incheon, from where the ill-fated ferry departed

Kim, 71, issued a tearful apology for the “horrible tragedy” the day after the accident, saying he and other company officials were responsible for a “grave sin” in letting it happen.

Live footage Tuesday showed Kim – wearing a dark hat and a mask shielding most of his face – mobbed by TV crews and reporters as he limped into the prosecutors’ office, held up by two aides.

Kim faces charges including negligence, embezzlement and tax evasion related to the family that effectively owns the company, according to media reports.

On April 28, prosecutors raided the coastguard office in the southern port of Mokpo to probe allegations that it had failed to respond quickly enough to a passenger’s emergency call.

All 15 of the surviving crew responsible for sailing the huge ferry remain in custody, facing charges including negligence and abandoning passengers.

The public’s already dim view of the crew worsened Monday when the coastguard released a video showing the trouserless captain scrambling to safety as hundreds of his passengers remained trapped inside the ferry.

The 10-minute video – taken by rescue officials – shows 69-year-old Lee Joon-Seok, wearing a sweater and underpants, hastily escaping from the bridge of the tilting ship.

The footage shows the open decks nearly empty, after crew repeatedly instructed passengers to stay in their cabins until it became impossible for them to evacuate.

The delay in the crucial final stages – when most crew members fled the ferry – sparked outrage that many lives could have been saved if passengers had received timely instructions.