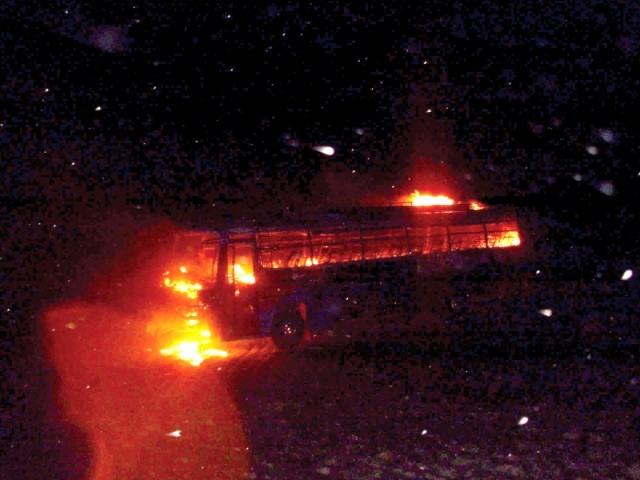 Tragedy struck on Thursday evening when 15 people were crushed to death by a speeding bus as it ran over pedestrians at Notak Ada in Dera Ghazi Khan.

The gruesome accident, which took place on the Indus highway within the limits of Kot Chhuta police station, also resulted in ten people getting seriously injured.

Fatalities caused by the Karachi-bound bus, which was carrying 50 passengers belonging to various parts of Khyber-Pakhtunkhwa, include several bystanders including four women and ten men.

In an attempt to flee the crime scene the bus driver, identified as Sameer Jan, a resident of Bannu, tried to drive the bus away and in the process hit another two motorcycles plying the highway.

Soon after the accident, angry protesters stopped the bus and set it ablaze. The driver was taken into police custody and shifted to an undisclosed location in view of public rage against him.

Hours after the crash, rescue work in the area was hampered by heavy downpour, with local residents expressing dissatisfaction over the delay in rescue operation and attacking police and rescue officials at the scene.

Meanwhile, the injured have been shifted to the trauma centre at the District Headquarters Hospital (DHQ) in Dera Ghazi Khan.