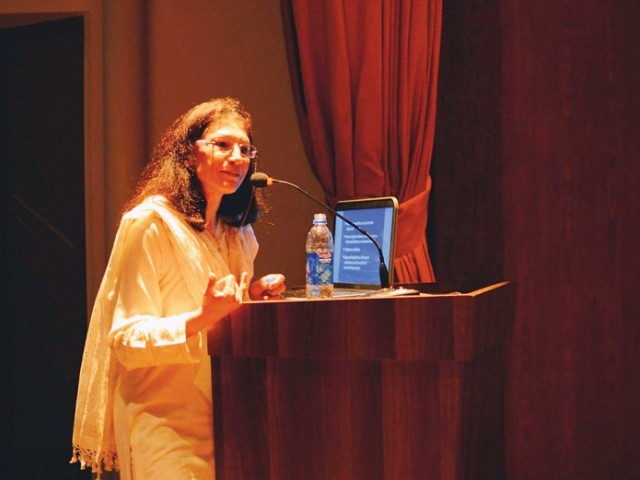 Working with competing narratives of the biggest and bloodiest migration in recorded history has always been a formidable venture. But in Ayesha Jalal one beholds a scholar of grit, who even as a graduate student at Cambridge in 1978 was already penning research that would go on to strike rude face-offs with the popular but deficient portrayals of the politics of Partition.

Clad in a crisp off-white kurta, churidar pajama and a flowing dupatta — the typical South Asian ensemble which she never forsook, carrying it to Columbia, Harvard and Tufts — Jalal settles down for a little chat with a group of social science undergraduates at the Institute of Business Administration at the Main Campus, University Road, during her recent visit to Karachi. According to her, Pakistan was not a democratic project resting on the comprehensive mandate of Indian Muslims, it was an accident. Its genesis was not intended by Jinnah, whose call for Muslim minority rights was misconstrued as a separatist slogan, leading to a hastily penciled border, accounts of which pour from the prolific pen of Jalal’s granduncle, Saadat Hasan Manto.

Although her thesis is ambitious and enjoys a strong academic ‘cult following’, it attracts many frowns. Jalal, whose work and lineage are both subject to murmurs, is pretty much inured to criticism for the sake of criticism. Holding up a copy of The Sole Spokesman, one of her first works which introduced her controversial thesis, she says, “I want to say this: this work that I do, all this work, this is not being done to please anyone. I am not seeking any votes and I’m not trying to win any hearts. People in India hate me as much as people in Pakistan hate me. Does it seem like I care?”

When the book came to the fore, several Pakistani newspapers criticised Jalal heavily for what they said was understating the influence of Islam in the creation of Pakistan. They asserted that she was influenced by Indian academics. And although she pretends not to, Jalal does regret that people form such opinions of her and of her work, which includes a total of eight books, The Pity of Partition being her most recent work, without even bothering to read it. “That’s just what people in this country do,” she shrugs. “They just love having opinions.”

Regardless of her position on Partition, Jalal is revered globally as a historian of meticulous methods. She was awarded the MacArthur Fellowship by the US government in 1998 and her research also won her the highest civilian honour of Pakistan, the Sitara-e-Imtiaz, in 2009. “As a woman, one has to work two hundred times more than a man to prove her mettle,” she says. “If you are a mother then it’s doubly difficult. I’d say put the rest of the world aside — even in a place like the US, there is substantial discrimination.”

Jalal cites the unabashedly chauvinistic environment at Cambridge during her student years as an example. “But the men from my Cambridge days were very different; a woman with intellectual ambitions was a whole new species for them,” she says.

Taking the middle route has never been an option for Jalal, she argues that instead of juggling responsibilities one should focus on a single task and get it right. “These Western feminist notions which suggest that a woman can be the best mother and also the best CEO and also the best ‘this’ and also the best ‘that’ is all a myth! If you want to raise the best children, then maybe you should just be raising children,” she says, adding that mediocrity has pretty much become a defining aspect in Pakistan today. “That’s the problem with women in this part of the world — they are not focused! They senselessly want everything which leads to mediocrity all over.”

And mediocrity is not the only problem in the country Jalal insists. “The thing is that we are all, in one way or the other, suffering because of the identity of being Pakistani. Unless you don’t understand history well, ignorance in all aspects will haunt you and you will remain confused. Today’s political and social movements reflect this confusion.” To rectify this, Jalal seeks a constant flow of historical knowledge from the university to the masses, even to those who may not attend universities. “What we, and specially the younger generation, fail to realise is that a state must be backed by university research.”

She laments what she calls as an ‘intellectual deficit’ in the population overall. “Today, the anchors on television are the bastions of intellect. Their sensational and immature discourses are out there to educate the common man.” She makes no secret of her irritation with the electronic media’s ‘hijacking’ of the information space in the country. Though wary of some popular anchors on television, she steers clear of mentioning their names. Jalal is, after all, an academic who is stung by the veneration of those who demonstrate little scholarly insight. “Our children don’t read. Our elders don’t read. Books are no longer a part of culture. People are, more or less, at the mercy of the ‘education’ that the media offers them,” she says, resting her case.

Islamabad sabzi mandi: A [un]usual day at the market