Arif confes­sed to having cooked and eaten the rest of the body, while his brothe­r Farman manage­d to flee.
By Atika Rehman / Ikram Paracha
Published: April 15, 2014
Tweet Email 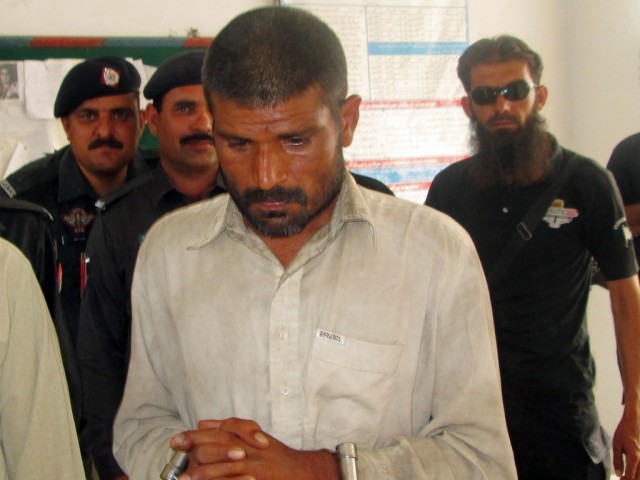 Arif, arrested on suspicion of cannibalism, is escorted to a police station in Bhakkar district on April 14, 2014. PHOTO: AFP

KARACHI / BHAKKAR: An appalling story that first came to light three years ago raised its grisly head once more on Monday when it was discovered that the ill-famed ‘Bhakkar cannibals’ were back to consuming human flesh after being released from prison.

Police arrested Arif, one of the two cannibal brothers, when the head of a toddler was recovered from their derelict home in Kahawar Kalan town near Darya Khan. Officials conducted a raid when neighbours complained of a putrid stench emanating from the two-bedroom house.

Arif confessed to having cooked and eaten the rest of the body, while his brother Farman managed to flee.

The brothers had returned to the neighbourhood 10 months ago after being released from prison, where they had served a term for stealing and consuming the remains of a girl from the graveyard in 2011.

The trial continued for approximately two years, culminating in a year-long prison term and Rs200,000 fine each.  While the sentence ended in May 2013, the brothers were released two months later as they had been incarcerated during the length of the trial.

Last year, during his visit to the Mianwali prison where the brothers were held, then chief justice Iftikhar Chaudhry said that the inmates languishing in jails despite having served sentences should be released after the government arranges their fine. Arif and Farman were subsequently discharged.

The fresh incident has spread fear in the area, where locals said they remained suspicious about the activities of the men when they returned and informed the police.

At the police station, accused Arif confessed to eating the flesh of the child, adding that his brother had brought the body. Although he continuously changed statements, he admitted that the two have been eating human flesh since they were released.

Acting DPO Ameer Abdullah Khan Niazi told journalists that the police started monitoring the accused as soon as they received information that the brothers were involved in ‘suspicious activities’.  Upon confirmation, he said the police raided the house and arrested one of them. Teams have been formed to arrest Farman, he added.

A new case under Article 7 of the Anti-Terrorism Act; Article 16 of the Maintenance of Public Order as well as 201, 297 and 295-A has been registered against the accused in which the police is complainant.

While police officials at the site reinforced the initial view that the brothers are ‘evil’ or involved in black magic, there is no record of their psychiatric evaluation despite them having undergone trial.

Coordinator for litigation at the Legal Aid Office, Haya Zahid told The Express Tribune that such evaluation is done at the trial stage. “In such cases, the court has to order an evaluation or the defendant can request it. The trial procedure has to be different for people with diagnosed mental conditions,” she said.

She also questioned the training of police officials who make claims that such criminals are mentally sound. “At the right juncture of the trial, a medical investigation should be done so they can rule out or certify that there is a medical issue.”

Dr Murad Moosa Khan, Chairman of the Department of Psychiatry at AKU, said that generally, any person with behaviour that is not in keeping with societal norms is seen as having psychological problems which needs evaluation.

“One must assess the crime and see how much is ‘badness’ and how much is ‘madness” – do these particular people have a psychiatric problem that has made them do this? If so, the level of responsibility is less.”

He also said that in such cases, the accused cannot simply be reintegrated into society.  “There needs to be a series of evaluation and monitoring of progress. They should be in a secure facility like a prison mental hospital.”