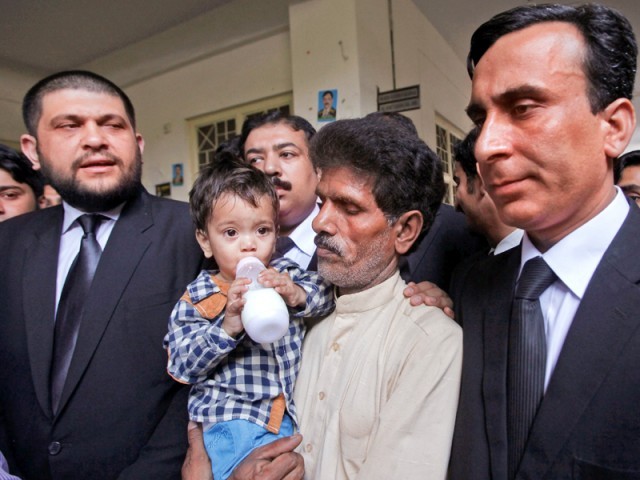 Nine-month-old Musa Khan carried by his grandfather as they leave the court in Lahore. PHOTO: REUTERS

On his second appearance in court on Saturday, nine-month-old Musa Khan looked agitated. But his distress had little to do with his implication in an attempted murder case under the Pakistan Penal Code. As he sat in his grandfather’s lap, milk bottle in hand, he momentarily stopped twirling Muhammad Yaseen’s moustache and let out a loud cry. The squabbling adults and crowd were too much for the infant.

Yaseen promptly picked him up and rocked him gently, cooing a quick lullaby. Around them, lawyers and observers inside the district and sessions court whispered to each other. “Shabash to the police for this achievement,” was one man’s sarcastic retort when he learnt why such a large crowd had gathered outside the courtroom.

The absurd case was dismissed on Saturday by Additional District and Sessions Judge Rafaqat Ali Qamar, when police officials appeared before the court contending that they didn’t want to arrest the infant. Qamar stated that the case was dropped as the ‘apprehension of arrest’ had ended.

He also issued a show-cause notice to the investigation officer (IO) of the case, asking him to describe why and how he had nominated a nine-month-old for attempted murder, threatening a police team and interfering in state affairs.

Talking to The Express Tribune, SP (Investigation) for Iqbal Town Division Tariq Mehmood Gujar said that the entire brouhaha was a plot hatched to humiliate the police.

He said the FIR initially did mention that the accused and his son had attacked the police but clarified that the child’s name was later dropped when it was learnt that he is an infant.  He said the accused party gained sympathy from the public merely to humiliate the police in cooperation with his lawyers. Earlier, the police were quick to shift the blame on the plaintiff of the FIR, ASI Kashif, saying they did not know that one of the accused was an infant.

DIG Operations Rana Abdul Jabbar earlier this week ordered the suspension of Kashif for lodging an FIR against an infant. “A nine-month-old can never commit such a crime,” he said.