Posting results on the doors of polling stations were done in an effort to make the election more transparent. 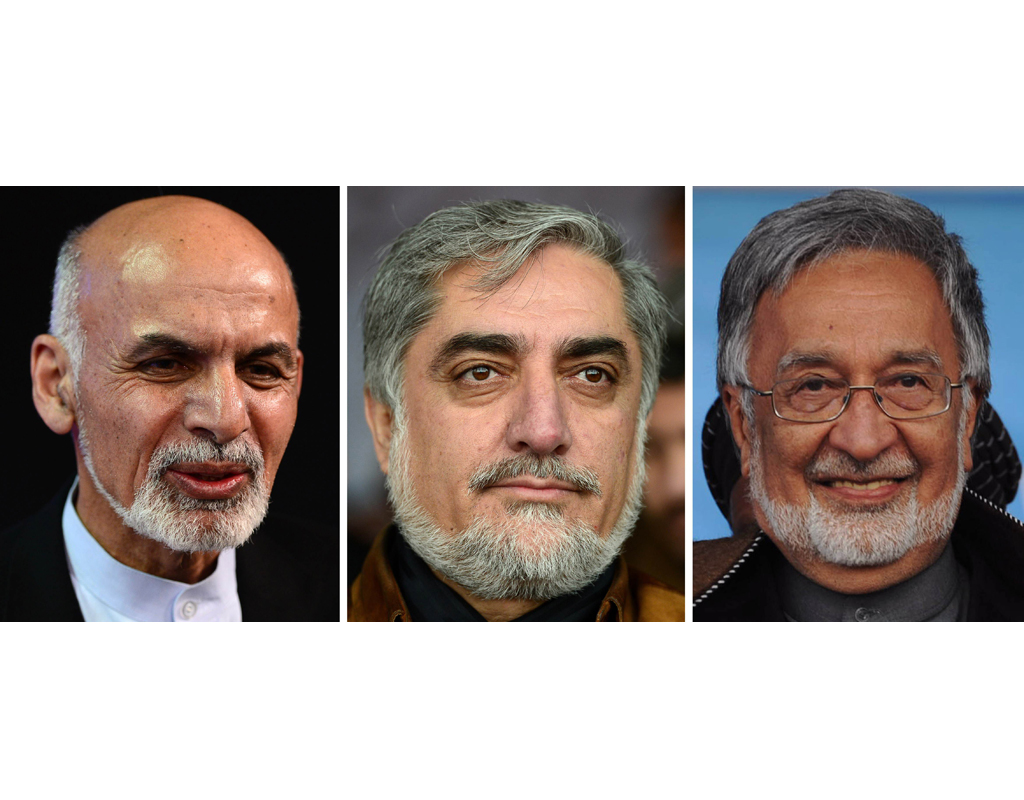 This combination of photographs shows Afghan Presidential candidates (L/R): Ashraf Ghani Ahmadzai attending a debate at Tolo TV station in Kabul on February 4, 2014, Abdullah Abdullah attending a Hazara gathering in Kabul on March 7, 2014 and Zalmai Rassoul during a political rally in Bamiyan on April 1, 2014. PHOTO: AFP
KABUL: Preliminary tallies from Afghanistan's presidential election showed former foreign minister Abdullah Abdullah leading in parts of Kabul on Monday but, with ballot counting likely to last weeks, it was far too early to predict a winner.

The two other frontrunners complained of fraud in the April 5 vote, which is meant to lead to the first democratic transfer of power in Afghan history as incumbent Hamid Karzai prepares to step down after more than 12 years as head of state.

Trucks stacked with plastic ballot boxes began to trundle into the capital where officials will tally votes from across the rugged country of around 30 million people.

The United States plans to withdraw most of its troops by the end of 2014, so the longer Afghanistan has to wait for the installation of a new leader, the bigger the risk of instability from a Taliban insurgency and from rivalry between factions in a country divided along ethnic and tribal faultlines.

"We are trying to start the process as soon as possible," Noor Mohammad Noor, a spokesman for the Independent Election Commission (IEC), said of the count.

If none of the eight candidates gets more than 50 per cent, a runoff will have to be held, at the earliest in late May, considerably prolonging the wait for a winner to be declared.

A tour of Kabul polling stations showed that Abdullah was firmly in the lead, confirming the popularity of the suave former anti-Soviet resistance fighter in the capital city.

However, although official preliminary results are not due till April 24, it looks increasingly likely Abdullah will face a runoff with Ashraf Ghani, an ex-World Bank official with a programme of radical economic reform.

Ghani, a former finance minister, should score well in the north as his running mate Abdul Rashid Dostum, an ethnic Uzbek former guerrilla leader, holds sway over much of the region.

According to informal preliminary tallies from around the country, ex-foreign minister Zalmai Rassoul may come a distant third. He is believed to have Karzai's backing and is expected to do better in the ethnic Pashtun-dominated south, where the Karzai family has strengthened its influence over the years.

Rekindling memories of the mass fraud that marred the previous presidential election in 2009, the Ghani and Rassoul camps both said they had received reports of violations and had submitted them to the Election Complaints Commission (ECC).

"There are reports of serious fraud in several locations but all is documented and will be passed on to ECC for investigation," Ghani posted on his Twitter account.

The extent of the suspected fraud was not immediately clear and the ECC was expected to take weeks to check the allegations.

"Unfortunately electoral fraud took place in many places. In many places observers were not allowed in and people were inside stuffing ballots," said Mohammad Khan, Abdullah's running mate.

"In Charchino district of Uruzgan, police took voting cards from voters and told them that a fight (with Taliban) was about to start, go home and we will vote for you," he told reporters.

International and Afghan leaders have praised the Saturday vote as a success because of a higher-than-expected turnout - estimated at 60 pe rcent of the 12 million eligible voters - as well as the failure of the Taliban to disrupt it significantly.

But some fear insurgents are preparing to disrupt the lengthy ballot-counting process and to stage attacks around the country once security arrangements have eased.

On Monday, at least 13 civilians were killed in a roadside bomb near the southern city of Kandahar but the attack did not appear to be linked to the election.

As part of efforts to make the election more transparent, polling stations at schools and offices across the country post results on their doors for the public to see.

A result sheet from Sayed Jamaluddin High school in Kabul, for example, showed Abdullah had received 190 ballots, Ghani 23 and Rassoul 11. The picture was similar at about a dozen other schools visited by Reuters in the west and north of Kabul.

Kabul is home to at least 20 per cent of the electorate, so a strong result in the capital could be key to the outcome.

Rassoul's strong base is in the south, but even there voters appeared to be divided, with signs that tribal influence in the deeply traditional region is starting to matter less.

Many people, especially young city-dwellers, defied the custom of voting for one of their own and said they backed Ghani, a Pashtun with roots in east Afghanistan, or even Abdullah, a half-ethnic Tajik with a stronghold in the north.

"In the districts of Kandahar, there was not a fair election," he told Reuters. "The observers were not able to go there to monitor the situation and that's how the government took advantage."

"In the districts of Kandahar, there was not a fair election," he told Reuters. "The observers were not able to go there to monitor the situation and that's how the government took advantage." 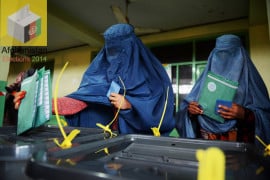 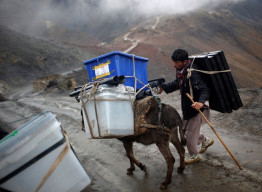 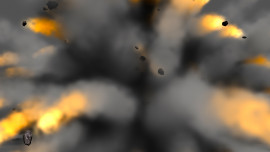 A very Cheap and biased reporting by such a leading news agency. By going to west and south of the province, you cant just report Abdullah as the leading candidate. For your kind information, we do have South and East also within Kabul and if your reporters had paid a single visit there, then you would have never thought of such biased reporting. We truly consider this attempt of REUTERS as biased and it has really undermined its impatiality.

It's a very unprofessionally written title of the news report which conflicts even with the first paragraph. "leading in parts of Kabul" does not mean Dr. Abdullah Abdullah is leading at all. This comes from a credible news agency; Reuters, which is cheap.