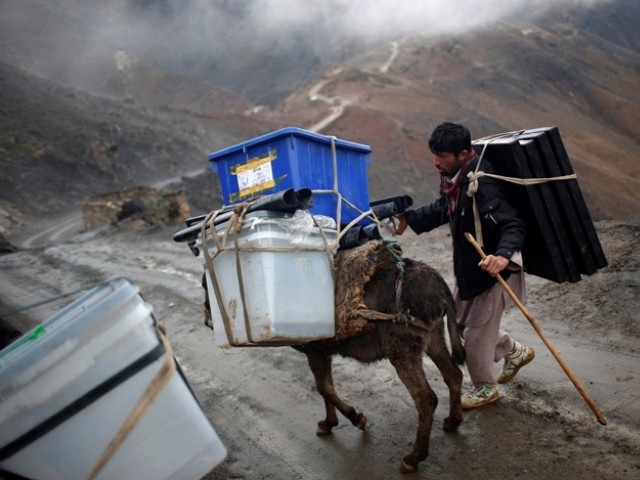 An Afghan man tries to control his donkey loaded with ballot boxes to be transported to polling stations which are not accessible by road in Shutul, Panjshir province, April 4, 2014. Photo: REUTERS

JALALABAD: The Taliban have launched a violent campaign to disrupt this weekend’s presidential election in Afghanistan, but in a restive eastern corner of the country they are paying villagers to surrender their voting cards.

Residents in Nangarhar province, which lies on the border with Pakistan, said local Taliban militants have been offering
voters 500 Pakistani rupees – the equivalent of just over $5 – to opt out of the election.

“At first we thought the Taliban were trying to trick us and wanted to find out who had voter cards, but later we found out that they were honest and paid money,” said Ahmad Shah, a youth in a village just outside the city of Jalalabad.

The Taliban did not respond to a request for comment.

Saturday’s election will bring the first democratic transfer of power in war-torn Afghanistan and an end to the rule of President Hamid Karzai, who has led the country since the ouster of a Taliban regime in late 2001. The Taliban have branded the election a Western-backed sham. The Independent Election Commission has said at least 10 percent of polling stations will not be able to open due to the threat of violence, the majority of them in the east where the insurgents are most active.

“When the Taliban are in control and warn people not to vote, and instead pay money for your voter card, it’s not a bad thing,” Haji Khan Wali, another man in the village, where the Pakistani rupee is more commonly used than the local currency, the Afghani. “People here have to think more about finding bread to feed their families than the election. To tell you the truth, half the people here don’t know anything about the election,” said Khan, wearing a white turban and long beard.

Local officials said they were aware of such reports from remote areas of Nangarhar, which are under Taliban influence. Southern and eastern parts Afghanistan are dominated by Pashtuns, the country’s largest ethnic group, which has traditionally enjoyed strong political influence. Karzai is a Pashtun, which made him an obvious choice for many in these regions at the 2009 election, but the three frontrunners to succeed him are also Pashtun. Of them, the one
with the closest links to eastern areas bordering lawless lands inside Pakistan is Ashraf Ghani, a former World Bank official.

Influential tribal elders say they would support any of the three candidates, but many people in remote areas of the region won’t be casting a vote anyway. In Nangarhar alone, 115 polling stations will not open due to concerns about mass fraud and ballot-stuffing as well as security, the provincial election chief, Akhtar Mohammad Ajmal, told Reuters.

A 10-year-old was caught with 1,200 fake voting cards in neighbouring Kunar province this week. The 2009 presidential election was marred by widespread fraud and another flawed election would undermine attempts by the United States and its allies to foster democracy ahead of the departure of foreign troops at the end of this year.