Father seeks justic­e for son who was made a camel jockey, tortur­ed regula­rly and deport­ed home.
Published: October 29, 2010
Tweet Email 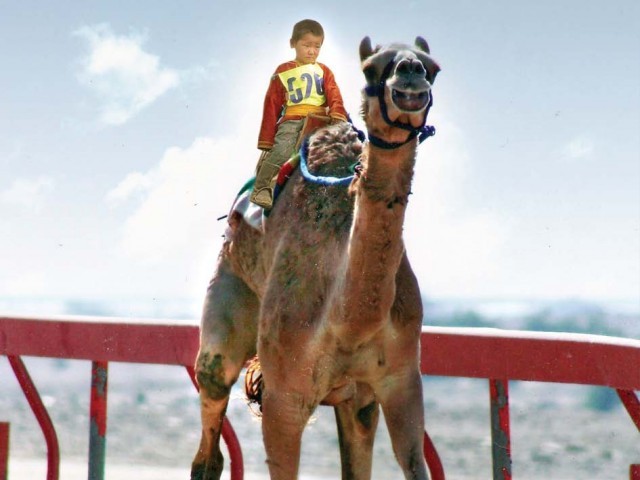 SUNJERPUR: Dadu Ram, a Sunjer pur resident, five months ago sent his 12-year-old boy, Wajesh Balach, to Dubai so that he may earn a living but the child was made a camel jockey, tortured regularly and deported home on October 27. Dadu Ram told The Express Tribune that he was told by an acquaintance that he had sent his son to Dubai who was now earning a good income. Dadu Ram said he was poor and was allured by the idea.

He said that he received an anonymous phone call on October 25 that his child was being sent back to Karachi Airport.

Dadu went to Karachi and stayed there for two days until he found his son in a ‘miserable’ condition at the airport.

He was told that someone dropped the child at the Dubai Airport, saying that he was insane. The Dubai Airport officials, he was told, chained Balach and boarded him on a flight to Karachi.

“My son was tortured for so many days. I appeal to the human rights organisations to help me,” he said, “Parents should never send their children abroad for work.”

Ram said that he was a poor man yet he collected the amount required to send his child to Dubai. “I got loans from my relatives. I’m under heavy debt now,” he said.

He said that his son could not gain consciousness for two days. “He could only tell me that some tall, well built men took him to a compound where a number of children of his age were already present. From there the children would be taken to the stadium and mounted on camels,” Ram said. He added, “He said the men used to beat him regularly for not sitting on the camels properly.”

“He said on October 24 two men at the compound left him at the Dubai Airport and told the officials that he was mad,” Ram said.

The Airport officials, according to Ram, chained Balach and injected him with something before boarding him on the plane. He fainted and only regained his senses at the Karachi Airport.

Ram said that there was a mafia in Rahim Yar Khan involved in sending young children from poor families to the Middle East. He said he would knock every door including the government and human rights organisations to seek justice for his child.