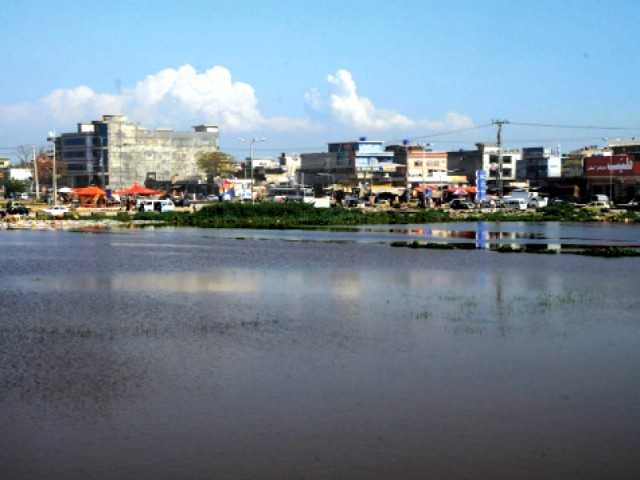 Chief commissioner claims he will ask for a report

At first glance, it appears as if one is staring at the still waters in Rawal Dam, except that the ‘artificial lake’ borders a main road in a congested suburb of the capital. Due to the recent rainy spell, water has accumulated in a 100 kanal swathe in Tarlai and it seems the Islamabad Capital Territory (ICT) administration is in no hurry to drain it, giving ample time to dengue-carrying mosquitoes to multiply.

Dengue season is around the corner, but instead of taking preventive measures, the administration is procrastinating on what needs to be done, that is drain the water.

Ironically, the land has been earmarked for the construction of Islamabad General Hospital. Despite a lapse of two weeks, the administration has failed to drain the water.

The people most at risk are those who frequent the market, ICT offices, a women’s vocational centre, a rural health centre, a private school and COMSATS University in the area.

“I’m surprised the administration is not willing to drain the water despite the start of the dengue season,” said Muhammad Zahoor, a guard at a private school. The administration will be responsible if any person dies from dengue, he added.

District Health Officer Dr Muhammad Azhar said, “I’ve taken a picture of the stagnant pool and brought it to the chief commissioner’s notice. I hope he orders drainage,” he added. Azhar said that health department is supposed to fumigate the site, but ICT’s local government department is responsible for draining water. He admitted that the dengue season was due to start and the administration should not take risks.

Last year, 225 dengue cases were reported in the federal capital, of which 175 were from rural areas. In 2014, so far, no dengue case has been reported. Dengue season starts from March and continues till October.

Apart from the accumulated water, ICT has yet to remove solid waste from the plot, which is adjacent to a rural health centre.

People have been dumping waste close to the health centre for many years, which is seldom removed due to the absence of a solid waste system in the capital’s rural areas.

Solid waste generated in 12 union councils in the suburbs is dumped in open spaces. Dr Azhar said people have no civic sense. Residents,  complained they had requested the administration several times to remove the garbage, but they did not bother.

Islamabad Chief Commissioner Jawad Paul said, “During a rainy season, if we drain water today, it will fill up again, because  of continuous rain.”

He claimed he would ask officials to survey the situation and give him a report. The administration had twice removed waste from the site but it was of no use, he added.