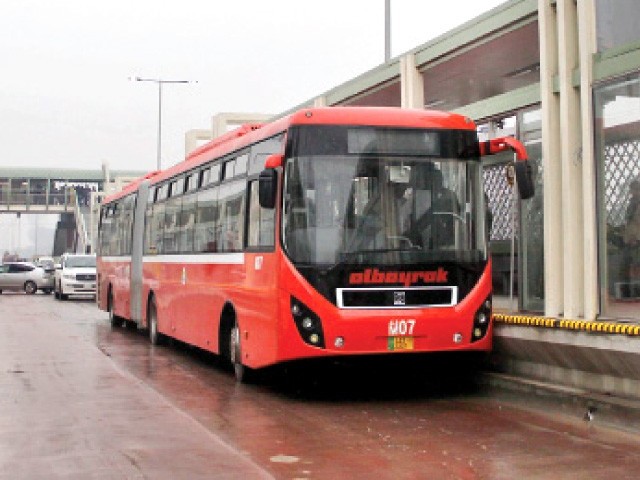 CDA on Tuesday approved the PC-I of the Islamabad section of the project. PHOTO: FILE

The capital’s civic authority has caved in to pressure from the Punjab government to approve the Islamabad section of the Metro bus project in violation of the city’s master plan.

The Punjab government’s haste to execute the Rs32 billion project for the twin cities has left the Capital Development Authority with no other option but to approve it.

The CDA’s reservations on violation of its Master Plan and necessary approvals from the prime minister also went unheard.

The CDA on Tuesday approved the PC-I of the Islamabad section of the project at a hurriedly-called meeting of its Departmental Working Party (DWP), despite the absence of complete quorum.

Also, the document is being processed without obtaining the prime minister’s permission for a one-time waiver of Public Procurement Regulatory Authority (PPRA) rules for hiring Nespak as the design consultant and the shortened timeframe for prequalification of contractors.

The Rawalpindi Development Authority, which is executing the project, had given only 10 days for prequalification of contractors, contrary to the standard one month under PPRA rules.

Similarly, permission required from the Cabinet Division for revision of the capital’s master plan has not been sought.

Two of the Islamabad’s avenues will be widened in contravention of master plan provisions, for which Cabinet Division permission will be required.

An official requesting not to be named said that the PC-I would now be sent to the Central Development Working Party and to the Executive Committee of the National Economic Council (Ecnec) for final approval.

“The [Punjab government] are in a great hurry. They just want us to process the document at the earliest,” commented the official.

A statement issued by the CDA said the DWP meeting was chaired by its chairman Maroof Afzal and attended by the Rawalpindi commissioner and other officials.

The statement said it was also decided that the natural beauty, environment and landscape of Islamabad will be protected.

The meeting also concluded that one per cent of the cost of the PC-1 would be set aside for the protection of the environment and horticulture.