Brimming with energy and wielding command over their craft, the dancers put up a brilliant show.

Why should dance be limited to weddings, studio classes or flash mobs? Perhaps, it is time to break that streak and celebrate the art form for its own sake. This is exactly what Raqs Revival was all about. It was an all-encompassing dance extravaganza, held at the Pakistan National Council of Arts (PNCA) on Friday evening.

Blending classical and contemporary styles in thematic performances, three dance troupes — the PNCA Dance Group, Mazmoon-e-Shauq and Faizaan Ahab Choreography and Design Solutions (FACDS) — had the audience simmering with excitement and anticipation. The idea of having such diverse dancers perform under one roof was a novelty in itself.

On the other hand, kathak dancer Asim Sharif, who had come from Lahore to perform Amir Khusro’s Raag Hameer, had to forego his performance owing to last-minute technical glitches in the sound equipment.

Dealing with the situation tactfully, the candid hosts Rehan Sheikh and Hareem Farooq kept the show going with impromptu humour and witticisms from the likes of Brazilian writer Paula Coelho on being footloose. “I don’t know much about dance except when Shahid Afridi strikes a sixer, I dance a little,” joked Sheikh while opening the show.

Swathed in a blue-green sari and ghungroos announcing her every step, Sumbal Arshad shone in the limelight, as she gracefully eased into Sur Tal, a combination of sur (melody) and taal (tempo), using the elements of the classical dances of the subcontinent, primarily Manipuri and Kathak. The PNCA trio performed in sync to the melody of Nazir Hussian Sheela. 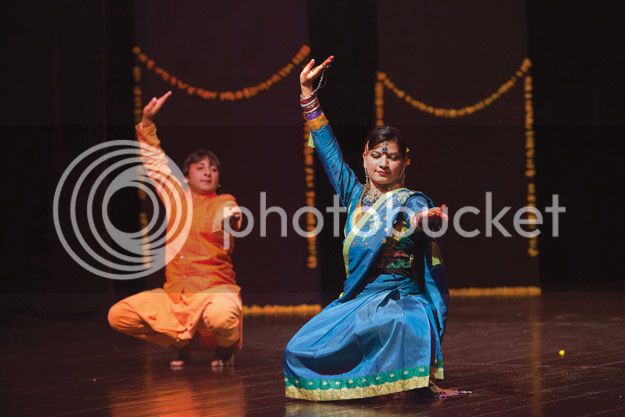 Brimming with energy and exuding command over their craft, the four dancers of Muzmoon-e-Shauq; Amna Mawaz Khan, Ayesha Iqbal, Feriyal Aslam, Iftikhar Maseeh and Marlies de Groot, came together to perform Jathi and Swaram Raag Maala, a traditional technical Bharatnatyam dance with different rhythms set against the basic 14-beat music. These then run through a medley of modes revived by the legendary classical dancer Indu Mitha. From their regal attire, lively expression and deftly-coordinated moves, they flowed effortlessly from one sequence to the next.

In the poignant dance drama Kashmir, the PNCA and Musmoon-e-Shauq dancers coalesced to narrate two accounts of people travelling on a bus, each coming home to a land that has been divided, reminiscent of the Kashmir that once was. The dancers comprising of Mitha, Aslam and the PNCA Dance Troupe, moved to the rhythms  of indigenous Kashmiri instruments from the late Mukhtar Sahib group and flute by Salman Adil.

The second-half of the show was a fusion of eclectic cultures. From Mughlai Tarana to Mitha’s composition of Sari Sunehri to Encounter, drawing on Bharatnatyam, ballet and Indonesia dance, the performances were refreshingly powerful.

In fluid, psychedelic moves, the dancers from FACDS namely Faizaan Ahab, Osman Khalid Butt, Ameer Gilani, Komal Jamil and Verdah Khan performed the dramatic dance narrative Mirror, Mirror on the track How Many Will It Take by Cornelius Duffalo and Kinan Azmeh. The dancers were one with the story of a man whose vanity consumes him, leading to a deathly downfall. Props, expression and movement set the stage for a memorable performance.

They wrapped up the show with an intense rendition of AR Rehman’s Haye Rama, performed by Ahab, Jamil and Butt, who stole the show with their chemistry and stage presence.

“This was amazing,” remarked Shireen, an audience member, as she was leaving the hall. “I’d have to say we should have more of such performances since there is obviously a thirst for them and it’s not that people don’t realise their value. It’s in our culture and our blood.”

The Bollywood film industry has not achieved anything to be proud of: Naseeruddin Shah