The women, who were unawar­e of the day's existe­nce, wanted a day to celebr­ate.
By Our Correspondent
Published: March 8, 2014
Tweet Email 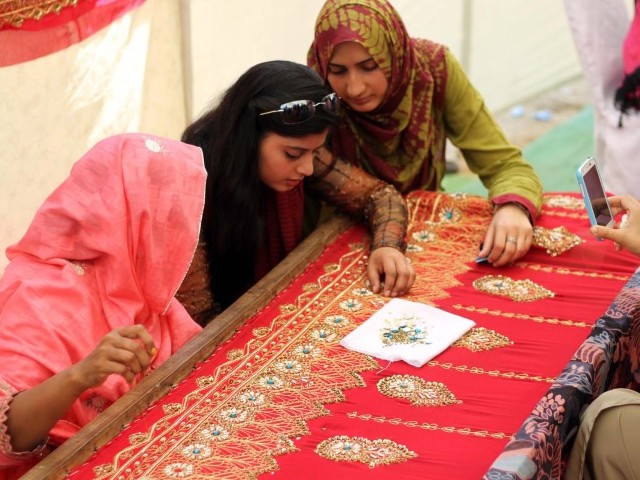 KARACHI: Women are an important part of society, they raise our children, they educate them and they shape their future, said Karachi University vice-chancellor Prof Dr Muhammad Qaiser on Friday.

The Higher Education Commission, Anjuman Taraqqi-e-Niswan, Social Work Department and the Karachi University Centre of Excellence for Women’s Studies (CEWS) collaborated together to celebrate Women’s Day at the Karachi University on Friday. The event showcased the work of craftswomen from Landhi, giving them an opportunity to sell their work.

“These women are from the Toosi area of Landhi,” said CEWS director Nasreen Aslam Shah. “We gave a group of women a loan of Rs10,000 each to invest in tools and machinery to improve their crafts. Today, the women present at this event are the recipients of that loan.

These women often need to use the money we give them to buy material in bulk to cut costs. For them, Rs10,000 is a lot of money, some have never even seen that much before.”

The women dabbled in a variety of crafts, from carpet weaving to bangle painting and managed to excel in all of them. “My team aims to emulate projects like those of the Self-Employed Women’s Association in India and Bangladesh. We want to help establish these women and give them training in marketing and purchasing – something that they sorely lack.”

Shah went on to explain her plans for a room in the department – the Self-Employment Room, as she called it – to be dedicated to helping these women. According to Shah, there are plans for computers and sewing machines to be installed there so that the women can come to the university and work.

“The government has pledged their support to aid these women and our project,” said Shah.

“It takes me around 15 to 20 minutes to make one of these, so I make around four to five pairs per day,” said 17-year-old girl Nimra from Landi pointing towards the shoes that she makes.

“I sell the pairs to Stylo [a shoe store] for about Rs40 per pair.”

Though she had never heard of Women’s Day, Nimra felt that there should indeed be a day especially for women.

Another craftswoman, also from Landhi, said that she had not heard of Women’s Day either. “This is a very time-consuming work,” she said, gesturing to the embroidery in front of her. “It takes me one day to finish one piece.”

Posters made by students covered the walls of the tent set up for the event. The posters were decorated with pictures of famous Pakistani women, such as Hina Rabbani, Naseem Hameed, Sharmeen Obaid and Major General Shahida Malik and others included messages from students.