Putin is being descri­bed as delusi­onal, head of crimin­al mafia, an ex-KGB Colone­l who has grown too big for his shoes.
By Moeed Pirzada
Published: March 6, 2014
Tweet Email 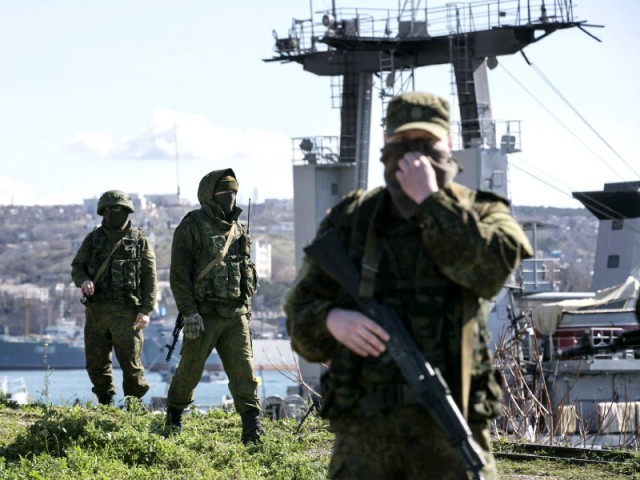 The Western media and political punditry’s colourful wardrobe of nouns and adjectives – usually reserved for Middle Eastern despots or Islamists – has been unleashed on a new target: Russian President Vladimir Putin.

He is being described as delusional, deranged, head of a criminal mafia, an ex-KGB Colonel who has grown too big for his shoes and a new czar who is strangulating the emerging democracy in Ukraine. This propaganda war is now more intense in the US media, despite the initial careful presentation of this conflict as one between Europe and Russia.

Since the Pakistani media for its worldview remains in the firm grip of western narratives – with its love of democracy, civil society, freedom and the right to self-determination – it may be important to start with some basic historical facts for a better view of the situation.

Crimean peninsula, an autonomous republic of Ukraine – where Russian troops have apparently fanned out from the strategic port of Sevastopol  – has been a Russian territory ever since the Ottoman Sultan surrendered this, through an agreement, to Russian czars in 1864. Sevastopol, strategically located at the northern coast of Black Sea, was founded by Russian Czarina Katherine II in 1893 and anyone who carefully looks at a world map can readily understand, and perhaps forgive, the hitherto undeclared cravings of Pentagon to replace the Russian Black Sea fleet with a powerful US naval force. No wonder in 1854-56, Great Britain had fought alongside the Ottomans (whom the English public hated) and the French (whose fantasies of protecting Orthodox Christianity irritated the English) to deny the Russian bear the control of the Eastern Mediterranean.

During World War II, Russians failed but shed their blood at every inch of the Crimean peninsula to thwart the German advance. But in 1954, Nikita Khrushchev, who was himself of Ukrainian descent, presented Crimea as a gift to Ukraine. In I991, Boris Yeltsin agreed that Crimea, with its Russian majority, could remain in Ukraine with the Russian Black Sea Fleet staying at Sevastopol.

However, underlying this deal was an implicit understanding or belief that Ukraine itself (with significant Russian population, especially in its eastern) will remain a zone of Russian influence. When Mikhail Gorbachev was having his negotiations with James Baker, the US Secretary of State, in the 1980s, he was adamant that NATO should not move one foot east into the zone of Russian influence.

The West pretended to love Boris Yeltsin for his steps towards democracy, but the politically chaotic Russia, under a perennially drunk Yeltsin, was weak in confronting an assertive Washington that started to dream of expanding into the “former Soviet space” and of making Georgia and Ukraine part of NATO.

Under Bush, Americans were telling Russians that their anti-ballistic missile systems in Poland and Czech Republic will be to thwart Iran. This was so ridiculous that even Imam Khamenei was not impressed; forget the likes of Putin and Lavrov in Moscow.

It is in this historic context and fears of the American expansion that Moscow views the overthrow of pro-Russian but elected President Victor Yanukovych  by the hooligans of Fatherland party, which Putin has described as a ‘coup d’état’. Scrapping the Russian language law in Eastern parts of Ukraine by these ultranationalists of western Ukraine only added credence to Moscow’s fears.

What will happen? United States and its Western allies will have to stop lecturing Putin on civil rights and the democratic aspirations of the Ukrainian people, and instead read books of realpolitik by Kissinger. Russian actions in Crimea and the initial flexing of military muscle on the border of Ukraine could be considered violations of the Treaty of Peace and Friendship, which Russia signed with Ukraine in 1997; or the spirit of the Budapest Memorandum, which US, Russia, UK and Ukraine signed in 1994.

But for any neutral observer, all that pales into insignificance when you measure it against US and western conduct in the pursuit of their strategic interests in Afghanistan, Iraq, Libya, Iran and the ongoing tragedies unfolding in Syria and Egypt – where all of the West seems to be in love with General al-Sisi.

Talk of sanctions or expelling Russia from G- 8 is nonsense. Putin’s Russia with its relationship of economic interdependence with Europe is not Ahmadinejad’s Iran. NATO’s meetings, even though Ukraine is not a member, were meaningless gestures; if anything, these confirmed the underlying aggressive designs.

When the dust settles, US and its European allies will have to concede an autonomous Crimean peninsula as a Russian zone of control or influence. But that is not all: if Ukraine has to survive as one political entity, then the constitution of the republic and the forthcoming elections in May will have to address Russia’s concerns.

This is what comes out from Putin’s press conference – far from being delusional, he appeared a calculating and shrewd statesman in the mould of Benjamin Disraeli or Franklin D Roosevelt. It’s time for Obama to smell the coffee.