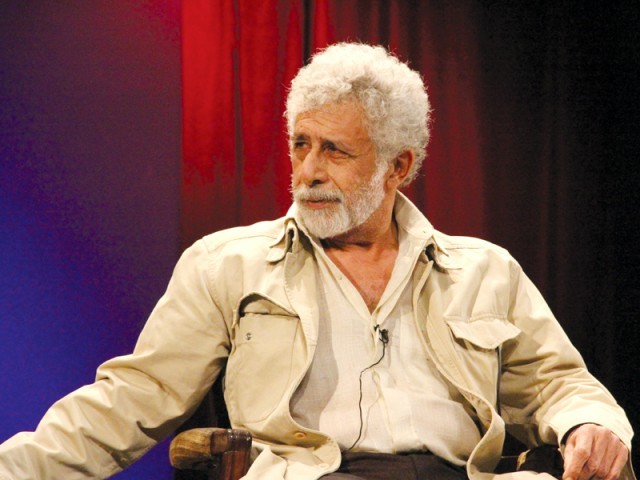 Veteran actor inaugurates NAPA Theatre Festival 2014; talks about his first acting gigs, his body of work and the divide between theatre and cinema. PHOTO: AYESHA MIR/EXPRESS

The excitement in the air was palpable as the NAPA Theatre Festival 2014 kicked off on Saturday with an invite-only session titled ‘In Conversation with Naseeruddin Shah.’ The session started in quintessential Karachi style – late, as the star attraction was held up in the city’s lamentable traffic.

During the candid session, moderated by Zinda Bhaag’s producer Mazhar Zaidi, the veteran actor candidly spoke about his earliest acting experience, gave his opinion on his own body of work, and imparted advice to the earnest theatre students in the audience.

Shah is known for his brutally honest, and at times acerbic, manner in which he speaks his mind – and this session was no exception.

At one point during his musings, he said, “There is nothing more challenging for an actor than to be alone on stage and hold the audience’s attention for an hour, singlehandedly.” But he did exactly that, and brilliantly so.

Naseeruddin Shah, and his prolific filmography, need little introduction. From his 1975 debut in Nishant, he has appeared in, according to his own estimates, some 250 films. His gravitas and acting talent may be undisputed but he admits that some, if not most of his roles, may be questionable selections for an actor. “I must have made 250 films in my lifetime, out of which 150 are easily terrible and 75 are average. The few that remain can be considered good, and out of those, hardly five can be considered great.”

Did he ever regret working with inexperienced directors? He vehemently denied finding inexperience to be a negative trait. “The films that I am proud of, most of them are by first-time directors. I have often regretted working with cinema masters, but never debutante directors,” he explained.

“There is a passion, and a fire, which burns in such people, despite the odds and the low budgets they have to work with. I love seeing the sparkle of a dream in the eye of a young novice. It reminds me that I was once a first-timer. Never forget where you started from.”

He highlighted how most aspiring actors and directors struggles, telling the audience a story of his humble beginnings as an actor. It was back when he was in grade nine in an Irish Missionary school.

“My school put on dramas every year and I was never able to get a role in any of them. I was always denied and it bothered me because I felt that I was better than those that were selected. I didn’t have anything going for me back then. I wasn’t good at any sport, I was unpopular, and I was terrible at studies. All I had going for me was my drive to be an actor. I dedicate the autobiography I am writing to all those who were at the bottom of their class, because I was one of them.”

And following that drive he did, not only within the confines of a theatre. “I decided that if I could not get a part in a play, I would stage my own.”

On what it takes to be a true thespian

From that first performance in the courtyard of his school, there was no looking back. He emphatically expressed the need for all aspiring theatre artists to not wait for what they deem to be the ‘ideal situation’ to put on a performance. Speaking to the NAPA students in the audience, he said,” I’d rehearse in a bus, next to the ocean, even on a train. If you truly love theatre, you do not need a facility. You need a text, and an actor – that is all. Do not wait for more theatres to open, because more theatres do not mean more productions. Do not wait for the ideal situation. If your intent is to communicate, then you can uncover the avenues to do so, anywhere.”

When asked what facilities and options should be made available to theatre students after they graduate, he emphasised the importance of taking an initiative through a sheer force of will, because no amount of training in an academic environment can prepare an aspiring theatre actor for what lies ahead.

“My own training as an actor at school was not applicable in the real world. This training makes one used to having resources as a theatre performer. That is an ideal scenario, which never holds up once you leave school,” he explained.

“Most graduates I know do not go on to pursue theatre because they give up once they are faced with the daunting reality of the world outside school. They then start to think there is no future in theatre. This is not a revelation; it is something every student should know before they enter this field!”

Shah himself was prone to feelings of disillusionment during his career, although one may not expect this from an actor of his stature. He started off as a “serious actor,” in his own words, and is to date considered one of the frontrunners of the parallel, new wave, movement in Indian cinema.

Once he started experiencing a modicum of success while exploring other, more commercial, genres of film, he was branded a sell-out. “I became disillusioned with alternate cinema, but I still never stopped working in it. I never sold out like some people thought I did. It’s just that nobody was watching what else I had been making – what I was still making.”

On an investor-driven industry

Speaking of lacking an audience, Shah also revealed that, contrary to the cult status that it enjoys now, the drama series Ghalib was a complete failure when it was first aired back in 1988. “It had a 0.2 viewership. Gulzar bhai (poet and writer of the series) never got the money to make another serial after that. He had never imagined it as a serial either, he wanted to make it into a film, but was denied the funding for that too.”

Ghalib remains one of Shah’s most widely recognised works, and sadly, one cannot expect to see something in a similar vein coming out of India or Pakistan in the near future. “People laugh at the idea of a 12-episode serial now. ‘Let’s talk about 120 episodes!’ they say. Such work does not get any backers anymore. People will never give you one crore, but they will be more than happy to give you 100 crores to make a blockbuster.”

“Making a good film is the last priority for a filmmaker in Bombay. The first goal is to make money. The second is to fool the audience.” And Shah feels that the audience is happy to be duped. “People will go see a commercial film that they hate three times. If this is not a form of intoxication then what is? Such films are poisonous, but they are a drug.”

The difference between theatre and cinema

Shah also believes that theatre and film cannot be compared as they are fundamentally different, especially in terms of exposure to an audience, as a play can only be performed in a particular location at one point in time. Film is not subject to these limitations, or in the trickery that it can perform on the viewer.

“The stage can never perform the same illusion that cinema does, because the audience will never be able to forget that they are inside a theatre and believe they are gaining a voyeuristic view into actual happenings in another’s life. Despite this, it has prevailed, because theatre’s identity is not defined by the wool it pulls over the eyes of the audience, but by the magic it creates through energy – the energy of the performer feeding off the energy of the viewer. Do away with all the frivolities and let human exchange take centre stage.”

In spite of the vast divide between the nature stage and the cinema, Shah does not believe that it requires different acting styles for a performer. “There is a term theatre actors use. Filmi. And a term film actors use. Theatrical. Both mean the same thing – bad acting.”

“The truth matters in both mediums, as does the actor’s ability to alter his performance. There are those actors that focus on projecting their voices for those in the back row, and forget that they have people sitting right in front too. Similarly, a film actor has to adapt his performance for a wide-angle shot or a close-up. The only difference in the acting style between film and theatre is for film you act in short takes, and theatre is in continuous acts. Both require adjustments to a performance.”

His definition of versatility

Despite his ability to excel as an actor in both theatre and film, and the wide range of characters that he can take on like a second skin, Shah dislikes using the term ‘versatile’ to describe himself, or any label at all for that matter. “I am an actor. That is my only label. An actor should be like a blank piece of paper which can show any color in an equally vivid manner.”

“When it comes to range, we all have the ability to be any kind of person. To realize that potential is to be a good actor.”

Nothing helps an actor realise their true potential more than a strong script, according to Shah. This is something that the actor feels is an area that has not evolved in the subcontinent, as theatre and cinema did not grow within their respective domains, like they did in Europe and America, but remained inexplicably intertwined.

“The best actor in the world can never flesh out a badly written character. An actor cannot be better than the film he is in. To all the scriptwriters out there, I urge you to write from the heart, about the truths of your own life. Pick subjects that matter. You have a responsibility to record the times you live in authentically. Fulfil it.”

In testament to how he holds a good script in high regard, Shah said that one of the roles he felt most fulfilled in donning as an actor was that of a visually impaired man in the 1980 film Sparsh, because of the simple beauty of the script. “It was one written with truth, and not with the intent to affect the audience. It is one of my favourite screenplays from the movies that I have done.”

His experience with the Pakistani film industry

For those who are curious, Shah responded to a query of whether his experience of working in a Pakistani film was a pleasant one with “Obviously.” Before he could be asked a follow-up, he offered his response to a question that was on everyone’s mind “Yes, I will be working on more Pakistani films in the future, as long as a good script is sent my way.”

As a parting statement, Shah spoke about bridging the gap between Indian and Pakistani cinema: “There should be more joint productions. That is a matter of fact. Disregard what the politicians say, there are multiple efforts being made to keep these two industries apart, but we have to resist. There is good work being done on both sides. It should be shared.”

The Motley Theatre Group, formed by Naseeruddin Shah in 1977, will be performing the play Ismat Apa Ke Naam on March 5 and 6 as part of the National Academy of Performing Arts Theatre Festival. The play includes three short stories by renowned Urdu writer Ismat Chughtai – Chhui Mui, Gharwali and Mughal Bachcha.

Pictures from the event can be found here.

Do fashion retailers have a place at fashion weeks?