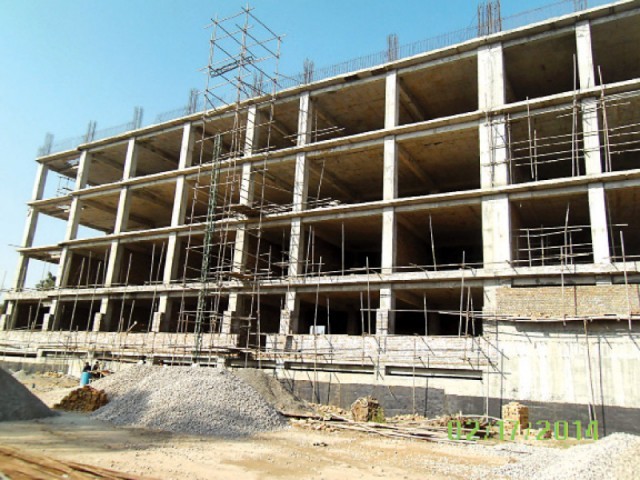 Due to slow pace of work, the Rawalpindi Institute of Urology and Kidney Transplant (RIUKT) project may not be completed on time.

The project was supposed to be completed by August 2014, but the slow pace of work indicates that the deadline may not be met.

However, Rawalpindi Commissioner Zahid Saeed claimed that work on the project would be completed by December.

“There was an issue with slow work, but now we have expedited our efforts,” claimed Irfan Qazi, the engineer supervising the project.

The Rawalpindi commissioner said that out of the Rs1.27 billion earmarked for the project, Rs650 million have been released so far.

Speaking to The Express Tribune, local MPA Raja Hanif said that a meeting would be convened in next few days at the commissioner’s office to discuss the issue.

He said that he would play his due role for early completion of the project.

“Honestly speaking, we could not convene a meeting to review the progress on the project as we were preoccupied with other issues such as the Ashura violence case and the metro bus project. We are going to take up this issue in the next few days,” he said.

“We have six months to meet the deadline and by putting extra efforts, we can and will meet it,” he claimed.

Free-of-cost medical care would be provided to patients at the facility once it is completed.

The residents of Rawalpindi have demanded that the government expedited the construction work on the much needed facility.

“The project is a positive step towards providing medical facilities to the citizens but such an important project should be completed on time,” said Rana Hayat, an elderly citizen.

Mr and Mrs Racer: In a first, female drives in Cholistan rally