Time to show some spine

Time to show some spine

K-P govern­ment should immedi­ately take stock of the morale of its police and take steps to improv­e their workin­g.
By Kamran Shafi
Published: February 23, 2014
Tweet Email 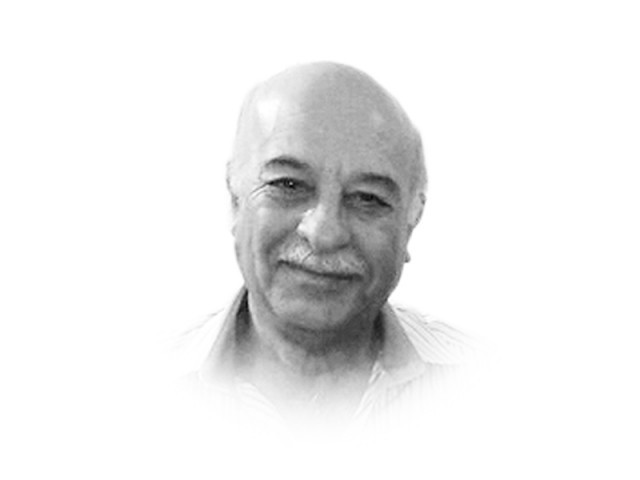 Readers or those who have seen me on talk-shows on our television channels in the past few days and weeks will recall how I had been recommending ‘Radio Silence’ while the talks were going on with the TTP for peace in the country. This because it was important to give time for the talks to make progress in a quiet manner without an over-bearing media trying to ferret out ‘news’ and queering the pitch.

However, considering the spate of unceasing violence perpetrated by the militants WHILE the talks were ongoing forced comment on this state of affairs. This is more so because I am a firm believer in ‘give them an inch and they’ll demand a thousand miles’, not the proverbial one mile. According to credible reports, ever since the ‘talks’ mantra started, something like 460 (and counting) have been wantonly killed across the country, which includes 308 hapless civilians; 114 soldiers; and 38 policemen. The cruellest of the killings are of 23 Frontier Corps personnel who were murdered ‘on camera’ just a few days ago after being kept in custody for three years.

As an aside, the Khyber-Pakhtunkhwa (K-P) government should immediately take stock of the morale of its police and take steps to improve their working. Perhaps it could start by its leaders attending the funerals of those policemen who are killed in the line of duty, and compensating their heirs generously. I say this because it has been reported that the women of the household of the Amn Committee member Zafar, who himself had been gunned down along with two nephews a few days earlier, were able to inform the police before the nine persons, some children of 16 years were gunned down just outside Peshawar two weeks ago. The Peshawar police turned up two hours after the killers had fled.

However, whilst these wanton killings have been much commented upon on the social media with all persuasion of people condemning them, what immediately upsets and angers me is a report in some papers of February 13, 2014, that the militants have now threatened to target the peaceable people of Kafiristan in Chitral’s quite lovely Bumburet Valley, and for good measure, the sectarian minorities who too live peacefully in Chitral and surrounding areas. Not too long ago, this peaceful community was targeted in Karachi too.

To refresh your memory reader, in regard to what good citizens these minorities are, and the debt this country owes to them, I had written in this same space on August 25, 2013 in my piece titled “So then: to this now”:

This is some of what we are told just recently about the sectarian minorities’ new tribulations in newspaper reports:

“The militants have announced an ‘armed struggle’ against an indigenous tribe and sectarian minorities in the picturesque northern Chitral Valley, calling on Sunnis to support their cause in a video.

“The 50-minute long video released on February 2 on their media wing’s website opens with a scenic view of the mountainous valley that is popular among domestic tourists and famed for its annual polo festival. The narrator warns the Kalash, who are thought to number only 3,500, to convert to Islam or face death”.

I call upon the government of K-P and the federal government and its agencies to provide the best protection possible to both these communities. As Pakistanis and Muslims, we owe complete protection to our minorities.

And so we go, my friends. While we should note the belligerence of the militants, the militant groups in their turn should also understand that they are testing the patience of the lay Pakistani, and therefore of the Pakistani state. They should understand, too, that the Pakistani state is a powerful state that is slowly but surely changing its strategic aims from what they once were. Indeed, most recently we are told that ‘Strategic Depth’ in Afghanistan is all but buried. Well, what have ‘traitors’ like myself have been saying for years?

I have to end by imploring our great TV channels that go hunting down politicians with much gusto, to show some spine. We have to rid ourselves of the scourge.