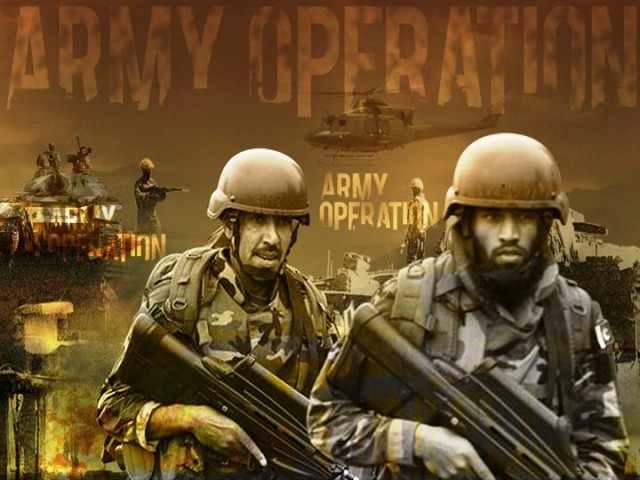 The fight against militancy in Orakzai has intensified since Friday when six paramilitary soldiers, including a senior officer were killed in a roadside bomb attack on a convoy of security forces in the restive tribal region.

Military helicopter gunships attacked militant positions in Orakzai, killing 13 insurgents and destroying four hideouts, according to government officials. There was no independent verification of the incident and no details about the identity of the dead.

Security forces stepped up action against suspected militants in Orakzai and Kurram agencies on Sunday. The forces were backed by helicopter gunships which targeted suspected militant positions in different areas including Khadizai and Kot Khali of Orakzai Agency.

The forces intensified their war on militants after a lieutenant-colonel and five soldiers were slain in a roadside bomb blast last Friday.

The militants seem to have no other options but to lay down arms and surrender before security forces, which have destroyed more than 30 training centres and 150 militant hideouts in the agency. The militants are on the run and are leaving behind arms and ammunition.

There are reports of clashes between security forces and militants in and around Khadizai and Kot Khali where insurgents are offering resistance due to the cover provided by hilly area.

During the ongoing operation initiated in lower and upper Orakzai agency some three months back, more than 1,300 suspected militants have been killed during ground and aerial offensives.

Five Taliban militants have been killed by security forces in different parts of Swat district on Sunday. According to the spokesman of Swat Media Centre Major Mushtaq, five persons, three in Kharreri and two in Gujar Banr areas of Matta tehsil, have been killed in clashes. The operation was launched on identification provided by militants who had surrendered. The dead militants have been identified by the local people as Haider Ali, Bakht Zada, Naeem Shah, Maraj Gul and Abdul Jabbar. A large quantity of weapons, hand grenades, AK-47 rifles and ammunition was recovered after the military blitz.