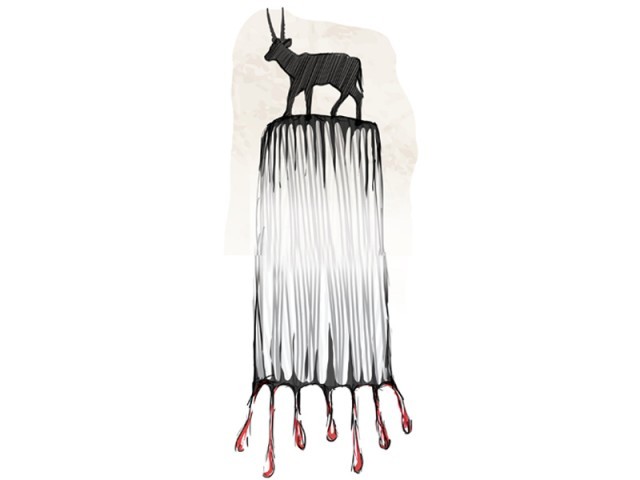 Shahtoosh, or the ‘king of fine wools’ in Persian, is the fine, natural fibre that forms the underfur of the Tibetan Antelope’s winter coat, commonly known as Chiru, that traverse the harsh Himalayan terrain in China, India and Nepal. Once found wild and free in large numbers, the Chiru would shed their underfur during spring which was gathered by residents and spun into beautiful shawls.

Shahtoosh being smuggled out of Nepal. PHOTO COURTESY: WWF NEPAL

From the royal courts of the Persian Empire and the subcontinent to the rich commoners, the popularity of the shahtoosh spread far and wide. As demand for the shawls increased dramatically, supply began to lag. And eventually market pressure led to the mass slaughter of the animal for fur. Activists have since campaigned for the protection of the Chiru whose critically low numbers have set off alarm signals across the globe.

With Indian-administered Kashmir a hotbed for the spinning and weaving of shahtoosh shawls, a nation-wide drive has been initiated to stomp out the trade. Jacqueline Lundquist, wife of the US Ambassador to India in 2001, was questioned by authorities for possession of a shahtoosh shawl which was later reportedly turned over to the authorities.

According to a report in the Times of India published on April 5th, 2003, anyone in possession of an ‘heirloom’ shahtoosh shawl had to present it to the authorities working under the Ministry of Environment to be stamped and recorded with a unique serial number for official records. A certificate of possession was then issued, barring the owner from effectively selling or ‘gifting’ the shawl that could only be passed on as inheritance. BBC News, on June 25th, 2007, reported that microchip tags were being used for all registered Tibetan antelope products by the Government of Jammu and Kashmir in India under a scheme to kill the shahtoosh trade. Anyone in possession of a shahtoosh shawl without the certificate of ownership and a digital tag, could reportedly face up to six years in jail.

According to conservationists, the shahtoosh trade doesn’t just impact the antelope population but also fuels exploitation of the skilled and often poor artisans who weave the shawls. It has also triggered cross-border smuggling and illegal trade of animal parts like ivory and rhino horn, and the poaching of other endangered species like tigers.

To escape the burden of responsibility, many trading with shahtoosh today claim that real shahtoosh is no longer available in the market and whatever is sold as shahtoosh is ‘shahtoosh’ only in name. This false claim comes with the recent seizure of 1,000kg of genuine shahtoosh fur in Nepal by the Central Investigation Bureau of Nepal Police from Gorakh District on January 6th, 2013. The seized fur was reportedly worth millions of dollars.

We live in a country where apart from a limited area in the North and North-West, the weather mostly remains warm and humid rendering fur clothing unnecessary. Millions make do with knit jerseys or lint-free sweaters, setting a precedent for others. If a brilliant designer like Stella McCartney can rock Chloe, Adidas, Gucci and her own fashion labels without using an inch of leather or an ounce of fur, then so can our talented fashion designers in Pakistan.

Nuzhat Saadia Siddiqi is a Lahore-based writer and
book hoarder. She tweets @guldaar

The lark in training