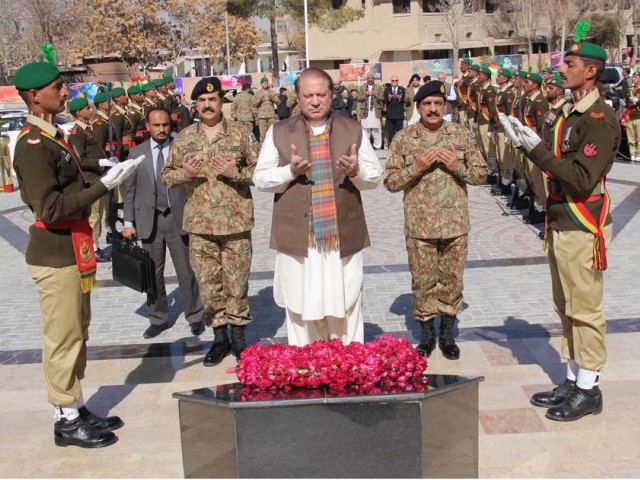 QUETTA: In a bloody week, in which at least 30 people were killed when a powerful bomb ripped through a bus carrying pilgrims in Mastung, a mass grave was discovered in Khuzdar and the security forces came under repeated attacks, Prime Minister Nawaz Sharif directed the political and military leadership in the province to devise a joint strategy to ensure peace in the crisis-hit province.

In addition to stressing on need for a joint security strategy for peace, Nawaz stressed on the need to accelerate development projects in the province to bring relief to people of Balochistan.

He also appreciated the role of security forces in helping bringing normalcy to Balochistan.

Earlier, Prime Minister laid floral wreath at Yadgar-e-Shuhada to acknowledge the contributions of Shuhada of Army, FC and Police who laid their lives to defend the motherland.

COAS General Raheel Sharif said that the Pakistan Army will provide maximum assistance in enhancing the capacity of Balochistan Police to ensure peace in the province.

Currently, Pakistan Army’s Southern Command in Quetta is training 200 policemen and Balochistan Constabulary forces. The eight week long course is due to conclude on February 7.

The COAS hoped that these trained personnel would play an important role in combating the menace of terrorism in the Balochistan.

Pakistan army is expected to conduct three more courses for Balochistan Police and Constabulary this year.